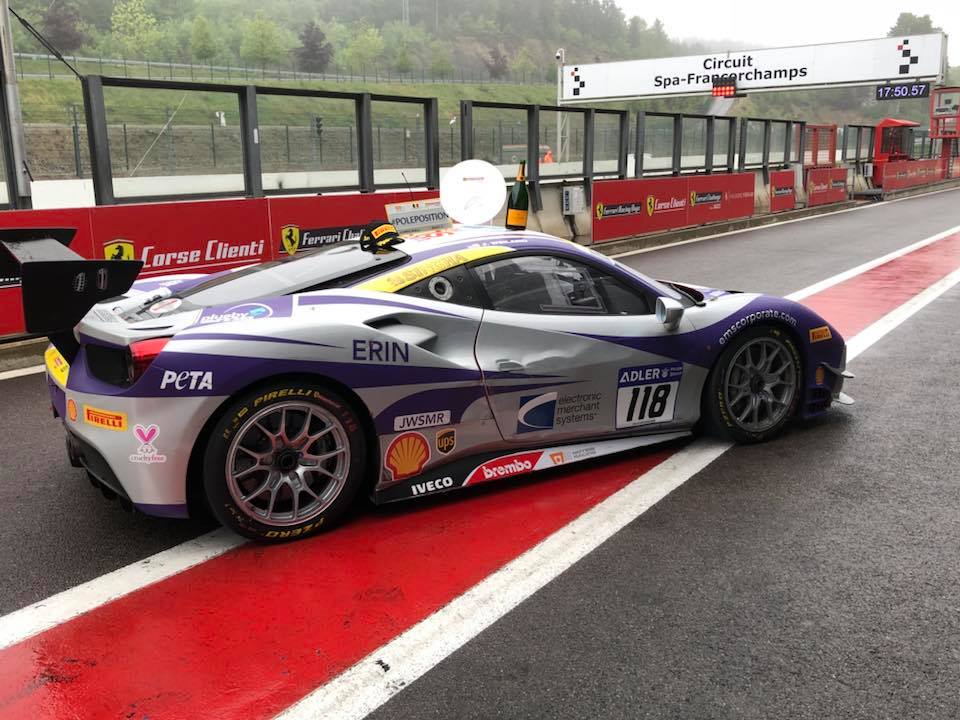 Formula One racing champion Lewis Hamilton once said, “Racing is what I love, so it’s pretty simple. I want to keep doing it and keep winning.” During the Belgium Ferrari Challenge, EMS Race Team kept doing what they love while earning a win at the world famous Circuit de Spa-Francorchamps. After receiving contact in Race 1 that ended their day early, EMS Race Team responded with a Race 2 victory after ERIN the ems+ Ferrari 488 Challenge and driver James Weiland earned pole position in the rain.

“We really won the race during the morning qualifying in the wet,” Weiland said. “Rain and fog came again in the afternoon while we were out on our formation laps on dry slick tires resulting in a safety car start and finish. Big thanks to Boardwalk Ferrari, Rossocorsa, Conrad Grunewald, Jim Malicki, Dave Cameron, Ray Banda and R3 Motorsports. ERIN’s speed in qualifying got us the win.”

ERIN started her weekend at Spa by qualifying third for Race 1—just over a tenth off pole. A not so great start to that race had EMS running 5th and trying hard to get their places back among a crowded track. On Lap 4, however, ERIN received contact and got pummeled in LaSource by the car behind her which broke the right rear suspension and ended her day prematurely. The Boardwalk Ferrari / Rossocorsa team worked diligently from there to get ERIN ready to run the following day. When ERIN returned to the track, Weiland capitalized by driving her to pole position in the rain. The team would ride that performance to the Race 2 victory.

ERIN and the Boardwalk Ferrari/Rossa Corsa team looking good after ERIN snagged Pole Position in the rain at Spa. Not too bad. Race goes at 10 am EST on https://t.co/wBhW8YNEml pic.twitter.com/YVvrIj3m14

“The team did a great job working through adversity and putting us in position for the Race 2 win,” Weiland said. “Our goal was to come to Belgium and do everything we could to raise awareness for PETA Cruelty Free, Cornerstone of Hope and Coach Sam’s Inner Circle and the victory certainly helped us do that. Hopefully we can carry this momentum into our next race in Montreal.”

The victory gave EMS Race Team their 5th podium finish of the season, one that’s made stops in Florida, Texas, Australia, New Zealand and now Belgium. Along the way, they continue to race to raise awareness for PETA Cruelty Free, Cornerstone of Hope and Coach Sam’s Inner Circle Foundation. People for the Ethical Treatment of Animals (PETA) is the largest animal rights organization in the world, with more than three million members and supporters. Products proudly displaying the bunny logo are cruelty-free, meaning that they were produced without testing on animals. Coach Sam’s Inner Circle Foundation’s mission is to provide educational support to at risk children through a combination of literacy, personal development and health and fitness programs designed to develop the whole child. Cornerstone of Hope, meanwhile, is dedicated to providing support, education, and hope for the grieving.