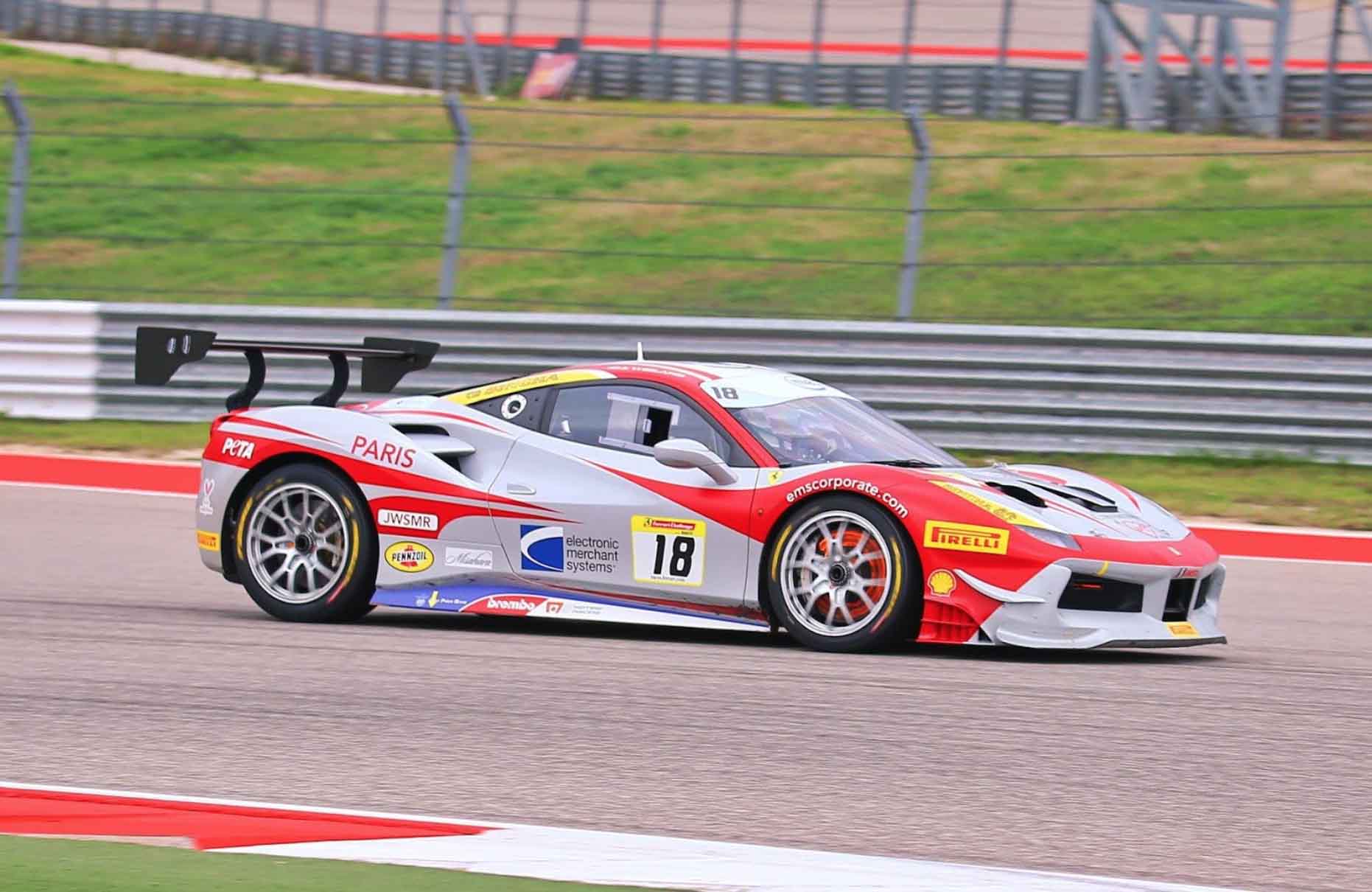 Formula 1 champion Lewis Hamilton once said of his racing career, “There have been some ups and downs, it hasn’t always gone my way. But that’s the way racing is supposed to be.” Following a pair of podium finishes in the Trofeo Pirelli pro class at Daytona International Speedway, EMS Race Team was met with uncontrollable adversity during the Ferrari Challenge at Circuit of the Americas. As a result of receiving contact that led to engine trouble during Race 1, driver Jim Weiland and Paris the ems+ Ferrari 488 Challenge would finish 9th overall. After not being able to repair that engine issue in time for qualifying on Sunday, Weiland would race a T-car for the duration of the weekend. Despite never driving that backup car before, he’d finish Race 2 just off the podium in P4.

Coach @ConradGrunewald breaks down Race 2 at @COTA as the team now looks to Melbourne, Australia for the next #FerrariChallenge weekend pic.twitter.com/QmuRFGQRg4

“Race 2 went a lot better than Race 1,” Coach Conrad Grunewald said. “Jim’s car from yesterday, Paris, didn’t run so well this morning so we missed the morning warmup. We borrowed Jean-Claude Saada’s backup car, which was very nice of him, and Jim qualified in that. He qualified 6th never driving the car before. We had to make some changes after qualifying and the setup wasn’t perfect. But then the race went great. There was chaos, I lost count of how many cars crashed. But Jim came away with fourth, he was right on the bumper of the guy that finished third. The top three guys were all nose-to-tail with Jim right behind them, so I think a couple more laps he would’ve moved up even further.”

During Race 1, the contact Paris received left her like a wounded duck for the rest of the race. The Boardwalk Ferrari / Ferrari San Francisco team worked tirelessly to correct the engine issue that resulted but Paris simply wasn’t ready to go in time for qualifying on Sunday. The team then shifted their focus to doing everything they could in a short period of time to get the backup car ready to race and did an outstanding job.

Inside the @ferraridallas / @FerrariSanFran garage with Rudy Courtade of @R3_Motorsports who talks about the adjustments the team had to make this morning to get the backup car ready for qualifying after Paris had engine trouble in warmups pic.twitter.com/EsmiPtp38d

“We had Paris basically set up and aesthetically comfortable for Jim to drive,” R3 Motorsports owner Rudy Courtade said of the work his team did to get the backup car ready to race on Sunday. “But since we had this engine issue, we had to switch to a T-car and some of the items we had to change to make it comfortable were the seat, the cool suit, cool blower, and of course the wiring and the radios were a little different so we had to do a little bit of that. Then, more importantly, the setup of the car on his original car is what Jim preferred to drive. So, we had to move the suspension components over to the T-car to get the balance correct so he can optimize his driving and qualifying.”

It was remarkable to watch the team working together to get the T-car ready for qualifying with only about an hour to do so. It was also impressive to consider that Weiland nearly drove that car to a podium finish in the Ferrari Challenge pro class despite never being in it before. But for EMS Race Team, it’s always about competing, putting forth that maximum effort and letting the chips fall where they may from there.

“Paris experiencing engine trouble and then being forced to move into the T-car was certainly not what we hoped for,” Weiland joked. “But that’s part of racing—as much as you might try, you can’t control the uncontrollables. You really have to credit the Boardwalk Ferrari / Ferrari of San Francisco team for not only getting the T-car ready to perform at a high level as quickly as they did, but also for trying to fix Paris’ issues as well. We were certainly proud of all the guys for that, and also proud to have represented three great missions in PETA Cruelty Free, Cornerstone of Hope and Coach Sam’s Inner Circle Foundation throughout the weekend in Texas.”