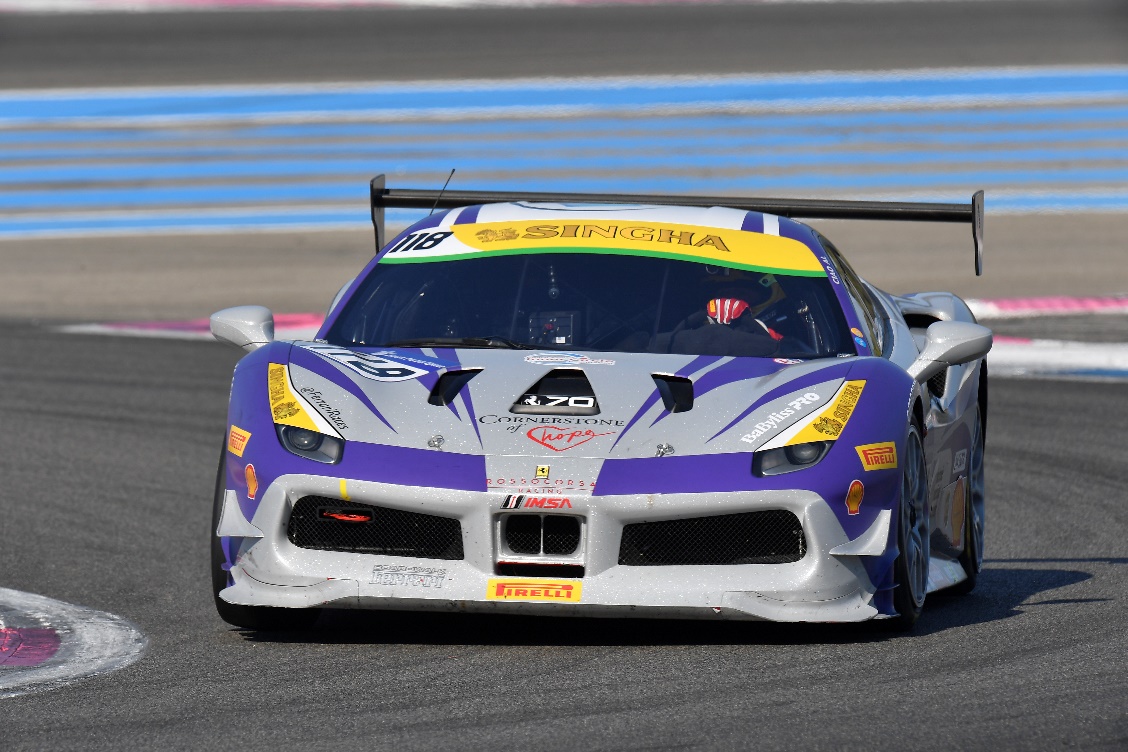 The world tour continues for EMS Race Team as Erin the ems+ Ferrari 488 Challenge travels to Silverstone Circuit in England on September 22-24. After races outside the United States in Canada, Hungary and France this season, driver James Weiland and the crew from Boardwalk Ferrari will compete for the first time ever in the United Kingdom later this weekend. The trip marks a return to Ferrari Challenge action for EMS Race Team who most recently secured a first-place finish in the Pirelli World Challenge Sprint X class at Circuit of the Americas in Austin, Texas earlier this month.

“We enjoyed making our debut in the Pirelli World Challenge at COTA but are certainly excited for the Ferrari Challenge at Silverstone,” Weiland said. “After representing PETA Cruelty Free, Cornerstone of Hope and Coach Sam’s Inner Circle in Canada, Hungary and France, we’re also excited to spread the word for those missions in England as well. This will be our first trip to the UK as a team so we’re focused on being as prepared as possible and putting forth an effort we can be proud of when we get on the track.”

“We’re excited to compete against all of the terrific drivers in England and to race an historic track like Silverstone,” Weiland added. “We will be racing against some of the best Ferrari Challenge drivers in the world so we know the competition will be stiff. We also know that Silverstone will be a fun but challenging course and we’re looking forward to the test. We’re dedicating the trip to PETA Cruelty Free and the tremendous work they’ve done helping stranded animals who were victims of the vicious hurricanes that touched down in Texas and Florida recently. It’s been inspiring to see the effort that so many people have taken to rescue those affected animals and we’re hoping to shine a spotlight on that with a strong outing.”

After Hurricane Harvey devastated much of the Texas Gulf Coast, PETA’s Community Animal Project rescue team members spent a week on the ground in Texas, where they trudged through the floodwater to search for abandoned, lost and injured animals. You can read more about that here. PETA also made similar efforts in Florida following Hurricane Irma as they have in the past after devastating storms, flooding’s and weather events throughout the country.

For more on PETA Cruelty Free and how you can support their effort to help the animals who were victims of Hurricanes Harvey and Irma visit PETA’s website. You can also visit Coach Sam’s Inner Circle Foundation and Cornerstone of Hope to learn more about how they are helping our communities as well on a daily basis. To follow along with behind-the-scenes coverage throughout race weekend in England, visit EMS Race Team on Facebook, Twitter and Instagram.