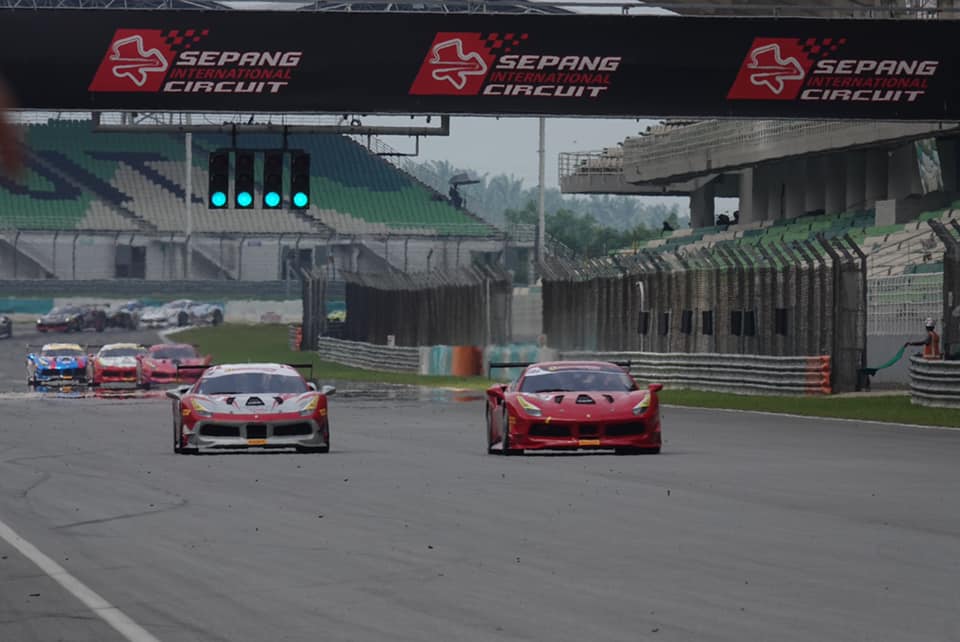 EMS Race Team driver, James Weiland, celebrated his birthday at the Sepang International Circuit in Malaysia during Ferrari Challenge weekend. But instead of cake and ice cream, it was all trophies and podiums for Weiland and his crew from Boardwalk Ferrari/Ferrari of San Francisco. During Race 1, Weiland and his ems+ Ferrari 488 Challenge trimmed in red, PARIS, came from the fourth position out of 22 drivers to secure P3 and the podium. PARIS would follow that up in Race 2 by qualifying less than .04 of a second off pole before finishing P2 to conclude the weekend.

“Getting up onto the podium at Sepang was a great way to celebrate my birthday,” Weiland said. “Maybe it was a birthday gift from the Man above. Big thanks to Him as well as everyone on our Boardwalk Ferrari/Ferrari of San Francisco team who did a fantastic job keeping PARIS running extremely well in the immense heat all weekend.”

When the racing action began on Saturday, Weiland lost two positions at the start of Race 1 and was forced to settle into sixth. From there, however, he and PARIS picked off one car at the end of the first lap for fifth position. They then got the guy just ahead for fourth a few laps later. On the final lap and second-to-last corner, Weiland managed to get inside in traffic and secure third place before crossing the finish line. In Race 2 on Sunday, PARIS got snagged again at the start by being on the outside. EMS would still gain a slight lead into the first corner before coming out of the second corner in third. Then, Weiland and PARIS picked up one position while driving a technically sound race to earn their second-straight trip to the podium in Malaysia.

“One of these days we are going to get a win over here hopefully,” Weiland joked. “But to be able to come over to Malaysia and help raise awareness for PETA Cruelty Free, Coach Sam’s Inner Circle Foundation and Cornerstone of Hope by getting them onto the podium twice in one weekend was a big thrill for us.”

People for the Ethical Treatment of Animals (PETA) is the largest animal rights organization in the world, with more than three million members and supporters. Products proudly displaying the bunny logo are cruelty-free, meaning that they were produced without testing on animals. Coach Sam’s Inner Circle Foundation’s mission is to provide educational support to at risk children through a combination of literacy, personal development and health and fitness programs designed to develop the whole child. Cornerstone of Hope, meanwhile, is dedicated to providing support, education, and hope for the grieving. Each mission was featured on Weiland’s car throughout the trip to Malaysia.

Next up for EMS Race Team is the Ferrari Challenge at Red Bull Ring in Spielburg, Austria on May 3-5. For more behind-the-scenes coverage of race weekend at Sepang follow EMS Race Team on Facebook, Twitter and Instagram.