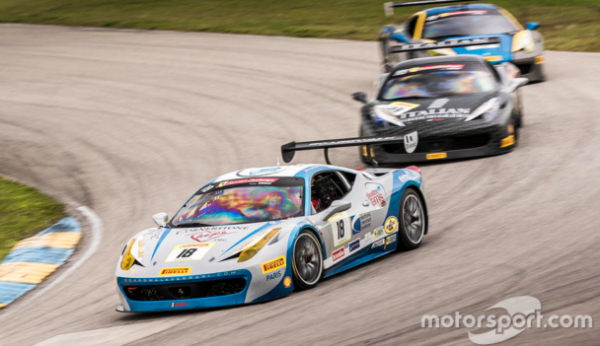 Champion driver Jeff Gordon once said, “When you’re in a race car, you’re going through so many different emotions throughout that race.” For EMS Race Team, while competing in the last regular-season event on the 2016 Ferrari Challenge North American schedule, there were many reasons for emotions to become a distraction at the Homestead-Miami Speedway. A solid showing there would create an opportunity to secure first place overall in the season points standings at the Finali Mondali next month. Meanwhile, a disappointing effort could make that next to impossible. But driver James Weiland and his crew from Boardwalk Ferrari refused to be overcome by those emotions.

While driving Paris, the ems+ Ferrari 458 Challenge EVO trimmed in blue, Weiland got out to a great start in Race 1 on Saturday. Despite some pressure by a collection of talented drivers in the Trofeo Pirelli AM class, he was able to earn a podium finish good enough for second in class and fifth overall. After following that up by earning pole position for Race 2 on Sunday, Weiland and Paris would stand on the podium again after completing another second place finish. The points EMS earned along the way would be enough to remain within striking distance for the overall title which will be decided at the Daytona International Speedway in December.

“We are excited to be in a position to compete for the Trofeo Pirelli AM title next month to be sure,” Weiland said following the race. “But that wasn’t anything we were thinking about heading into the races at Homestead. We knew coming in that if we were going to accomplish our goals as a team, we needed to take this one race at a time. We competed against some great drivers here, and we knew we would need our best effort to get onto the podium. We didn’t win, but we got up there twice and gave ourselves a chance to accomplish something special next month.”

EMS Race Team is now three points off the overall lead behind friend and rival, Steve Johnson (Ferrari Fort Lauderdale). In Race 1 and Race 2 at Daytona International Speedway on December 2-3, a win is worth 20 points for each of the two races. A second place finish is worth 15 in each race, third is 12, fourth is 10, and so on from there. On December 4 at the World Finals, EMS and the Boardwalk Ferrari crew will then compete against the other Ferrari drivers from around the world in addition to the North American series drivers.

“We haven’t spent much time talking about points or standings this season, and we’re certainly not going to start now,” Weiland added. “It may sound cliché, but it really is all about one race at a time for our team, and continuing to find ways to improve. That’s what we’ll do when we come back to Florida next month and we’ll have a great time doing it. But what we’re most excited about is continuing to raise awareness for PETA Cruelty Free and the Cornerstone of Hope just like we did in Miami. That’s the biggest honor for us each time we compete, and we hope to close the season strong by raising even more awareness for the great work that each of those teams do for our community.”