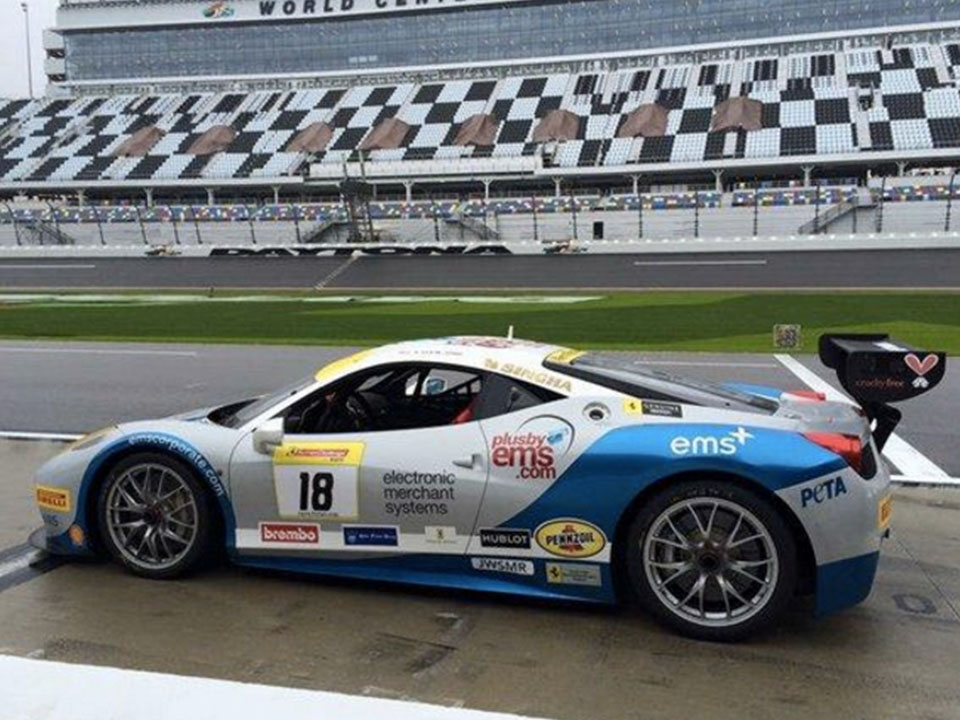 The 2016 Ferrari Challenge season got off to a slow start on Thursday, as rain poured down on the world-famous Daytona International Speedway. But by Saturday morning, clear skies and sunshine would give way to an exciting day of racing that preceded the Rolex 24. As the weekend concluded, EMS Race Team would eventually earn a podium finish while breaking in a new car and celebrating the charities they compete to promote.

The new ems+ Ferrari Challenge 458 EVO is named Paris. She is the sister of Erin, who was driven over the past two seasons by James Weiland. Her first official qualifying session was rained out on Thursday, so the drivers were slotted according to how they finished the 2015 campaign to begin Race 1. This put EMS Race Team of Boardwalk Ferrari starting outside row four, positioned 1st in class and 8th overall. Shortly after the race began, however, an incident on Lap 1 dropped Paris all the way back to 36th place overall. Despite making up significant ground, moving all the way up to 18th by mid-race, a second incident ended her day—but Paris would respond the next morning.

The Boardwalk Ferrari crew, along with Erin, helped make sure Paris was ready to compete at a high level on Saturday and that’s exactly what happened. After snagging pole in class during an actual qualifying for Race 2, Weiland’s No. 18 car would ironically start 8th overall in the same exact spot as Race 1. From there, Paris would help him engage in a classic duel with competitors Steve Johnson and Wei Lu throughout the morning. The following description of how that battle played out during Saturday’s race at Daytona is offered via Ferrari.com

“James Weiland (Boardwalk Ferrari) had a successful early start, finding himself racing against the Trofeo Pirelli drivers for the first half of the race. However, yesterday’s winner, Steve Johnson (Ferrari Ft. Lauderdale) wouldn’t let him out of sight, edging Weiland to his limits. And on several attempts, Wei Lu (Ferrari of Vancouver) tried to sneak in on the attack for a top three finish but unfortunately entered Turn 1 from the straightaway with too much force, losing him a chance for the podium. Johnson would stand on top of the podium steps again, with Weiland on his left and Arthur Romanelli (The Collection) on his right.”

Weiland was very complimentary of Johnson, Lu, Romanelli, and his other competitors following the race on Saturday. He was also proud of his team, who did a great job putting Paris in a position to earn her first podium while waving the flag for Cornerstone of Hope and PETA Cruelty Free all weekend long.

“Johnson is a great competitor and put up a tremendous fight,” Weiland said after the race. “He drove really hard, along with Wei Lu, Arthur Romanelli and all of the other drivers. While first place is certainly our goal, it felt good to get the season started with a podium finish that we can build on heading into our next race. I really thought our Boardwalk Ferrari crew led by Rudy Courtade and David Cameron did a tremendous job of getting Paris ready to run. As always, I also appreciated the expertise of my coach, Conrad Grunewald, and data manager, Andrew Prendeville.”

What also meant a lot to Weiland was the awareness he helped begin to raise again this season for the two charities that are prominently featured throughout Paris’ updated design.

“We’ve always had the Cornerstone of Hope and PETA Cruelty Free logos on our car, but I think Paris’ updated design helps those logos appear more prominent,” Weiland added. “With some of the new drivers in the series this season, we were asked about each organization and always appreciate the chance to let people know about the great work that Cornerstone and PETA continue to do for our community.”

For more pictures, videos and behind-the-scenes coverage of race weekend at Daytona, check out @emsRaceTeam on Twitter and Facebook. Also be sure to stop by emsRaceTeam’s Vimeo page.