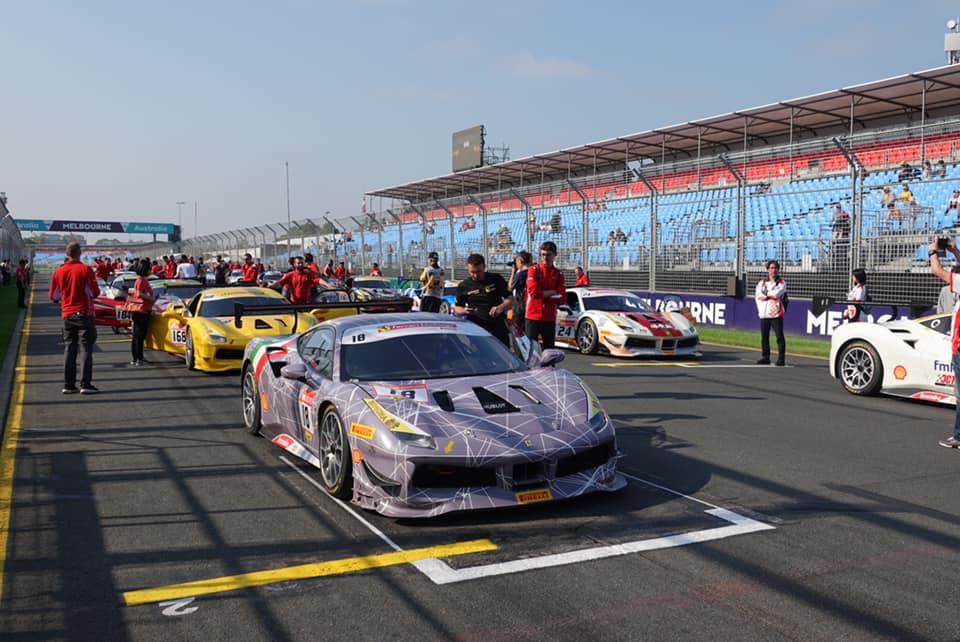 EMS Race Team competed in the Melbourne, Australia Ferrari Challenge and secured a podium finish in the land down under for the second-straight year. But while the third racing event of the season ended on a positive note, it certainly wasn’t easy. At the conclusion of Practice 2, the cockpit of PARIS the ems+ Ferrari 488 Challenge filled up with smoke. The fire team extinguished the flames in the engine compartment before finding the top half of the engine melted. The Boardwalk Ferrari / Ferrari of San Francisco team remarkably got a backup car ready in less than two hours for Qualifying 1 which driver James Weiland would then race for the duration of the event.

Well an eventful day. Ran 2nd overall in both Practice 1 and 2. At the end of Practice 2 the cockpit filled up with smoke and we pulled over and got out and the Fire Team extinguished the flames in the engine compartment. Top half of engine is melted… https://t.co/QJwiZ7F9oM pic.twitter.com/h26KrNUkwY

Despite going on to qualify second for the first race of the weekend, EMS was assessed a five-place grid penalty for switching cars and started in seventh position as a result on Saturday. Weiland would pick off five cars at the start of Race 1—eventually passing the leader following a restart—before the upper arm broke just prior to the white flag forcing EMS to retire from the overall lead with a broken left front suspension. On Sunday, however, things would finally begin to break Weiland’s way. Starting in third position, EMS Race Team snagged second at the start of the race and held on from there to finish on the podium in P2.

“All’s well that ends well I guess here in Melbourne,” Weiland said. “It’s never a bad thing to be on the podium during F1 weekend. Much gratitude to the Boardwalk Ferrari / Ferrari of San Francisco team for a magnificent job with the backup car and many thanks to the Ferrari Challenge APAC series for all their assistance with a great race weekend as always.”

A packed house of racing fans were on hand as Weiland and company helped get PETA Cruelty Free, Coach Sam’s Inner Circle and Cornerstone of Hope up onto the podium in Melbourne once again. With the Ferrari Challenge serving as a support race to F1 weekend, there was an added excitement throughout the event. Those fans would go on to watch Mercedes driver Valtteri Bottas win the Rolex Australian Grand Prix 2019 by 20.886 seconds.

“To get our three causes up on the podium with so many fans here for F1 weekend was especially rewarding,” Weiland added. “Hopefully some of those fans who were here throughout the weekend took notice and maybe went on to learn a little bit about each of those foundations.”