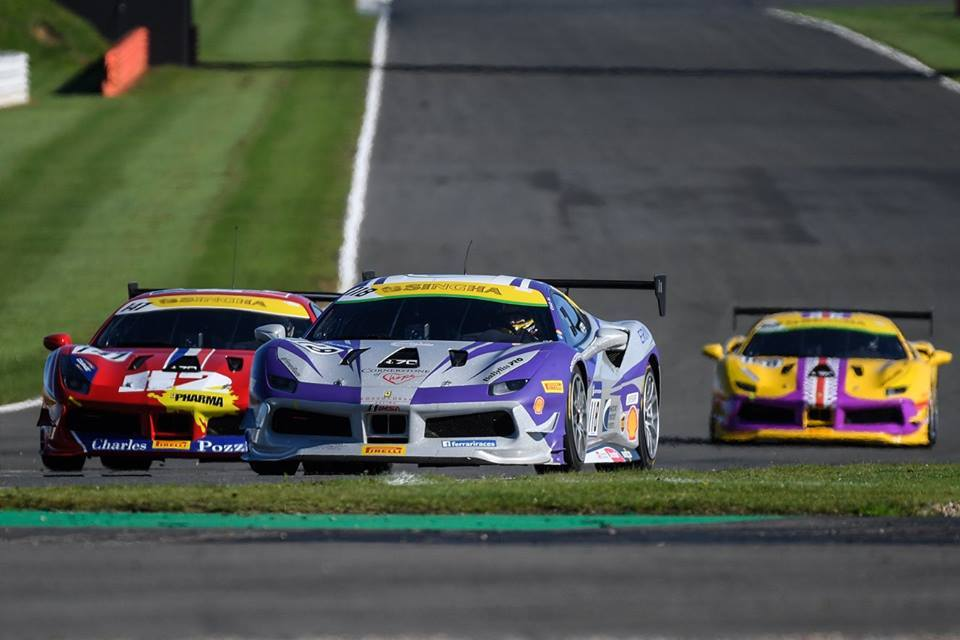 EMS Race Team captured a podium finish during an epic battle at the Ferrari Racing Days in England. After races outside the United States in Canada, Hungary and France this season, driver James Weiland and the crew from Boardwalk Ferrari continued their Ferrari Challenge world tour at the Silverstone Circuit on September 22-24. Fresh off a win at Circuit of the Americas in Austin, Texas during the Pirelli World Challenge earlier this month, EMS Race Team kept the momentum going with a P3 performance in Race 1 at the site of the British Grand Prix. Erin the ems+ Ferrari 488 Challenge fought hard down the stretch to hold her final position in an effort that Ferrari.com described as “extraordinary.”

“Erin was really strong throughout the race and that’s a credit to our Boardwalk Ferrari team who had her dialed in all weekend,” Weiland said. “Silverstone is a fun track to drive but it’s also challenging. The competition was stiff as well, like it always is when we travel to Europe, so I’m proud of our team for being prepared and responding to those challenges in the way that we did. If you watched the broadcast, you could see how tight things got down the stretch. It took a total team effort to hold our competitor off and get onto the podium, and I’m proud we were able to accomplish that.”

After qualifying in fourth position for Race 1, the second qualifying session was hampered by a slower car that impeded Erin’s progress during her flyer lap. The net result was starting in eighth position for Race 2, which went on to feature an especially chaotic start. Weiland picked off three cars during the early chaos and moved into fifth position with an opportunity for a second podium of the weekend. Unfortunately, EMS Race Team would later receive a drive through penalty for passing in a yellow corner that nobody on the team saw or heard, as it was never announced on the official radio. But despite finishing 10th in Race 2 following the penalty, the trip to England was still very much a success.

“Obviously Race 2 didn’t go the way we would’ve hoped but that happens in racing,” Weiland said. “We came here to England to raise awareness for Cornerstone of Hope, Coach Sam’s Inner Circle Foundation and PETA Cruelty Free and that’s really what we’re most excited about accomplishing. We dedicated the race weekend to the tremendous work that PETA has done helping stranded animals who were victims of the hurricanes in Texas and Florida recently, and we’re glad to be able to get up on the podium to honor that effort. We’re also looking forward to continue raising awareness for those three causes in a couple weeks at the Imola Ferrari Challenge.”

After Hurricane Harvey devastated much of the Texas Gulf Coast, PETA’s Community Animal Project rescue team members spent a week on the ground in Texas, where they trudged through the floodwater to search for abandoned, lost and injured animals. You can read more about that here. PETA also made similar efforts in Florida following Hurricane Irma as they have in the past after devastating storms, flooding’s and weather events.

For more on PETA Cruelty Free and how you can support their effort to help the animals who were victims of Hurricanes Harvey and Irma visit PETA’s website. You can also visit Coach Sam’s Inner Circle Foundation and Cornerstone of Hope to learn more about how they are making an impact in the community. For more behind-the-scenes coverage from Silverstone in England, visit EMS Race Team on Facebook, Twitter and Instagram. Next up for EMS Race Team is the Ferrari Challenge at the Autodromo Internazionale Enzo e Dino Ferrari in Imola, Italy on October 6-8.