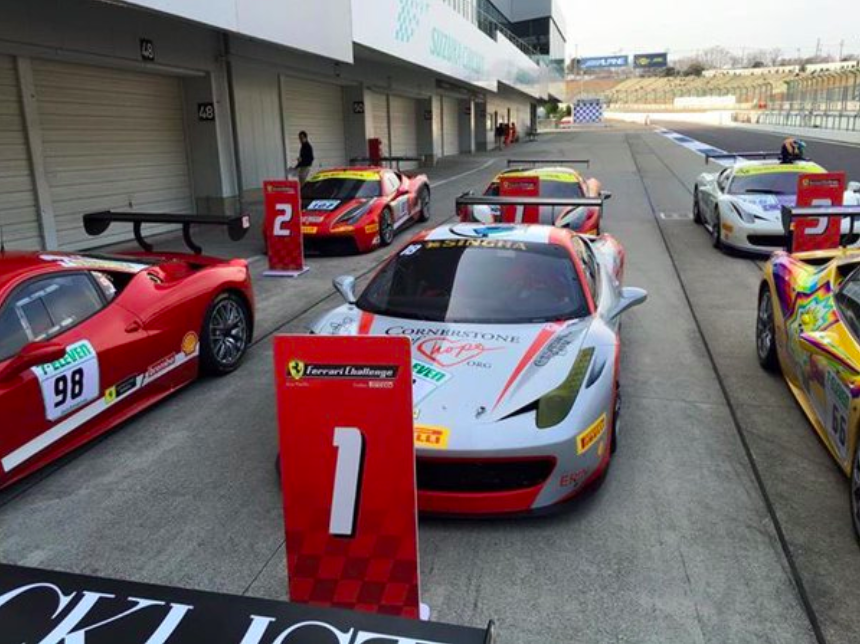 After traveling over 6,000 miles to the world famous Suzuka Circuit in Japan, EMS Race Team driver James Weiland found himself in a classic duel. During Race 1 of the Asia Pacific Ferrari Challenge, fellow driver Eric Cheung of Canada had gotten off to a great start and spent the majority of the afternoon battling Weiland for the top spot in the Pirelli AM class. But Erin, the EMS Race Team Ferrari Challenge 458 EVO, pushed just hard enough to eventually secure a victory that kicked off a whirlwind weekend.

“This was a once-in-a-lifetime opportunity to travel here and compete in the Asia Pacific Ferrari Challenge,” Weiland told the media following the race. “Suzuka is one of the best circuits in the world. It was exciting for our team to compete here and we really enjoyed our time in Japan. I can’t thank my coaches and crew enough for their preparation and the work they did to put us in position to earn a 1st place finish. It was a total team effort.”

It took every ounce of that collective effort to hold off Cheung, who finished less than one second behind Weiland’s No. 18 car. Additionally, with over 20,000 competitive kilometers logged on her dashboard entering the weekend, Erin struggled with her rear traction as she weaved through the windy course at Suzuka. At times, she was difficult to manage and maneuver. But when it came down to the final stretch, Erin roared liked the first day she rolled off the lot in Maranello en route to the win.

“The Boardwalk Ferrari crew did a tremendous job preparing Erin to race in Japan,” Weiland added. “We drove our new car, Paris, exclusively at Daytona but needed to go back to Erin this weekend as we tweaked some things. Dating back to the Finali Mondali in Italy last year, this is the second-straight event that Erin helped us earn a victory outside the United States. So we might be calling on her again the next time we compete overseas.”

As exciting as the outcome of Race 1 was for the team, attention quickly shifted to Sunday. Coach Conrad Grunewald helped Weiland analyze his performance and prepare for an even better run in Race 2 throughout the evening. Meanwhile, Ryan Negri, David Cameron and the Boardwalk crew made sure Erin was tuned up and ready get back out there. Those efforts would eventually be rewarded, too, as EMS Race Team went on to earn consecutive pole positions and its second-straight 1st place finish in Race 2. Sweeping the weekend was an outcome Weiland certainly hoped for, even if realizing the accomplishment caught him off guard following the race.

“I was actually very surprised that we were able to win again today,” Weiland told the press following his Race 2 victory on Sunday. “Saturday’s race was draining and it took a lot out of us. But we’re obviously very excited about the results, especially competing against a field of drivers as talented as we have here at Suzuka. We are also excited because we came to Japan hoping to get the PETA Cruelty Free Bunnies and Cornerstone of Hope onto the podium, and we’re thrilled to be able to do that twice.”

Thrilled to push the @ClevelandCOH logo past the finish line in 1st place twice at @suzuka_event this wknd! pic.twitter.com/NCBAqyRINf

EMS Race Team dedicated Race 1 at the Suzuka Circuit to raising awareness for the PETA Cruelty Free campaign, while dedicating Race 2 to the Cornerstone of Hope Foundation. To learn more about the two charities that fuel the fight for EMS, check out the following websites:

For more behind the scenes photos and videos from the trip to Japan, check out EMS Race Team on Facebook and Twitter.