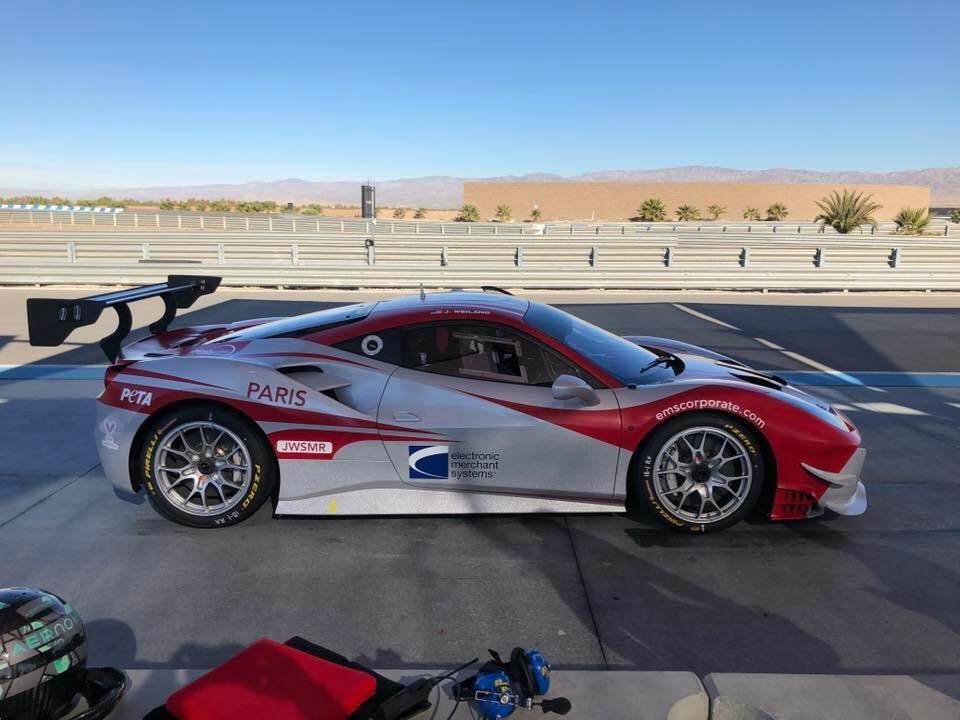 After concluding the 2017 season at the Mugello Circuit in Italy this past November, EMS Race Team will open the 2018 Ferrari Challenge at Daytona International Speedway on January 25-27. It will mark the first of eight races for driver James Weiland and the crew from Boardwalk Ferrari who will be competing in eight different countries throughout the year. Weiland and company will be racing around the world once again to raise awareness for PETA Cruelty Free, Cornerstone of Hope, and Coach Sam’s Inner Circle Foundation and it all begins at Daytona.

The trip to Daytona later this month will be the first time Weiland has competed at the world-famous track in Florida since securing the Trofeo Pirelli AM season championship in 2016. It will also be the first time Weiland will be driving the newly redesigned ems+ Ferrari 488 Challenge trimmed in red named Paris. Weiland and Paris will look to leverage EMS Race Team’s past success and familiarity with Daytona amongst a competitive field in the Trofeo Pirelli class.

“Daytona is a challenging course to be sure but it’s also one that we really enjoy racing,” Weiland said. “We didn’t get a chance to race here last year, but we did make two trips to Daytona in 2016 so we’re familiar with how we need to drive to be successful. Racing in the Trofeo Pirelli class this season, we know we won’t have any margin for error. But if we control what we can control as a team, put forth our best effort and execute a disciplined race, we will be happy with the results.”

Starting a new season offers a renewed sense of commitment to the causes close to EMS Race Team’s heart. For Cornerstone of Hope, their volunteers and staff spent many hours over the holidays supporting those who were grieving the loss of loved ones. Coach Sam’s Inner Circle Foundation, meanwhile, is in the middle of a school year pouring their collective energy into helping at-risk third-graders with reading and writing. PETA Cruelty Free is working to minimize testing on animals all over the globe. It’s these reasons and others that inspire EMS Race Team to raise as much awareness as possible for those efforts out on the track.

Racing to raise awareness for the following causes:

“We’re honored once again to be representing PETA Cruelty Free, Cornerstone of Hope and Coach Sam’s Inner Circle Foundation throughout the 2018 Ferrari Challenge,” Weiland added. “The work those three charities do is incredibly inspirational on many levels. Paris’ new design has each logo featured even more prominently this year, and we hope to spread as much awareness as possible by turning in an effort they would be proud of each time out.”