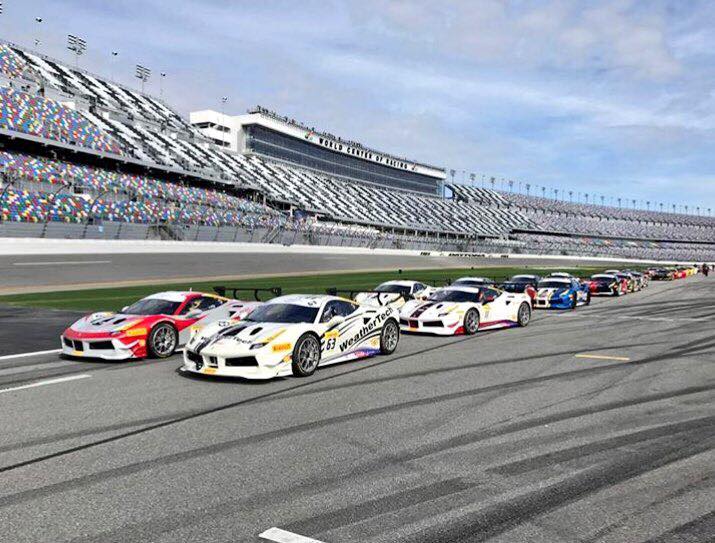 The great Mario Andretti once said, “Racing is like one big family, ultimately, and when you come back to it, that’s really what it feels like.” EMS Race Team opened the 2018 Ferrari Challenge at Daytona International Speedway by returning to their Boardwalk Ferrari/Ferrari of San Francisco family to begin another season of racing together. Competing in the Trofeo Pirelli pro class, they would eventually put forth a collective effort that was worthy of a pair of podium finishes.

Driver James Weiland and Paris, the ems+ Ferrari 488 Challenge, raced to finishes of 3rd overall out of a field of 39 cars in both Race 1 and Race 2 at Daytona. After competing for pole position during qualifying, Weiland started each race in the second and third spot, respectively, to give his team a chance at a podium. Cooper Macneil (Ferrari Silicon Valley) was the winner in Race 1 while Peter Ludwig (Wide World Ferrari) secured the victory in Race 2. In each race, Weiland held off Joseph Rubbo (Ferrari of Long Island) who finished fourth.

“Jim was bumped up to the pro class again this year and he qualified well throughout the weekend,” Coach Conrad Grunewald said. “He had a really good race going in Race 1, running P3 for most of the race. He made a small mistake, ended up back in P4, but the guy he was racing for the podium also made a small mistake. Jim got back on the podium from there, and finished that way. We were really stoked with the performance, Jim’s racing against guys who raced fully professional for many years, so finishing on the podium is a big success for him.

“Then on Saturday, he drove an even better race. Jim was able to hold onto the two pro guys up front. The car was better balanced for him, and he drove a much more solid race. The guys he was battling on Friday weren’t really a factor in Race 2. He pulled about a 3-4 second lead on them and was able to inch away. Overall, it was a really good weekend, so now it’s on to the next one.”

Paris and a long line of #FerrariChallenge cars ready to take the track for qualifying 2 this morning at @DISupdates pic.twitter.com/6iGO4vU5l4

The next race for Weiland and Boardwalk Ferrari/Ferrari of San Francisco is the Melbourne, Australia Ferrari Challenge in March. But before shifting focus to that one, Weiland reflected on his team’s performance throughout the weekend. He also talked about the opportunity to raise awareness for Cornerstone of Hope, Coach Sam’s Inner Circle and PETA Cruelty Free during the Ferrari Challenge event that served as a support race for the highly anticipated Rolex 24 at Daytona International Speedway.

“It was a team effort this weekend and we’re really proud of the way that everyone contributed,” Weiland said. “Our crew had Paris dialed in and she responded well out there on the track. So, big thanks to R3 Motorsports, Boardwalk Ferrari/Boardwalk San Francisco, Nathan Dunning, Ryan Negri, Rudy Courtade, Dave Cameron, Daryl Cameron, our coach Conrad Grunewald, and everyone on the team who helped make it a successful trip. With the Ferrari Challenge fans and everyone pouring in for the Rolex 24, we wanted to represent Cornerstone of Hope, Coach Sam’s Inner Circle and PETA Cruelty Free to the best of our ability and fortunately we were able to accomplish that.”

Cornerstone of Hope is an effort dedicated to providing support, education, and hope for the grieving. Guided by Christian values of compassion and service, they welcome and serve all seeking support. Coach Sam’s Inner Circle Foundation’s mission is to provide educational support to at risk children through a combination of literacy, personal development and health and fitness programs designed to develop the whole child. The People for the Ethical Treatment of Animals (PETA) is the largest animal rights organization in the world, with more than three million members and supporters. Products proudly displaying the cruelty-free logo mean that they were produced without testing on animals.