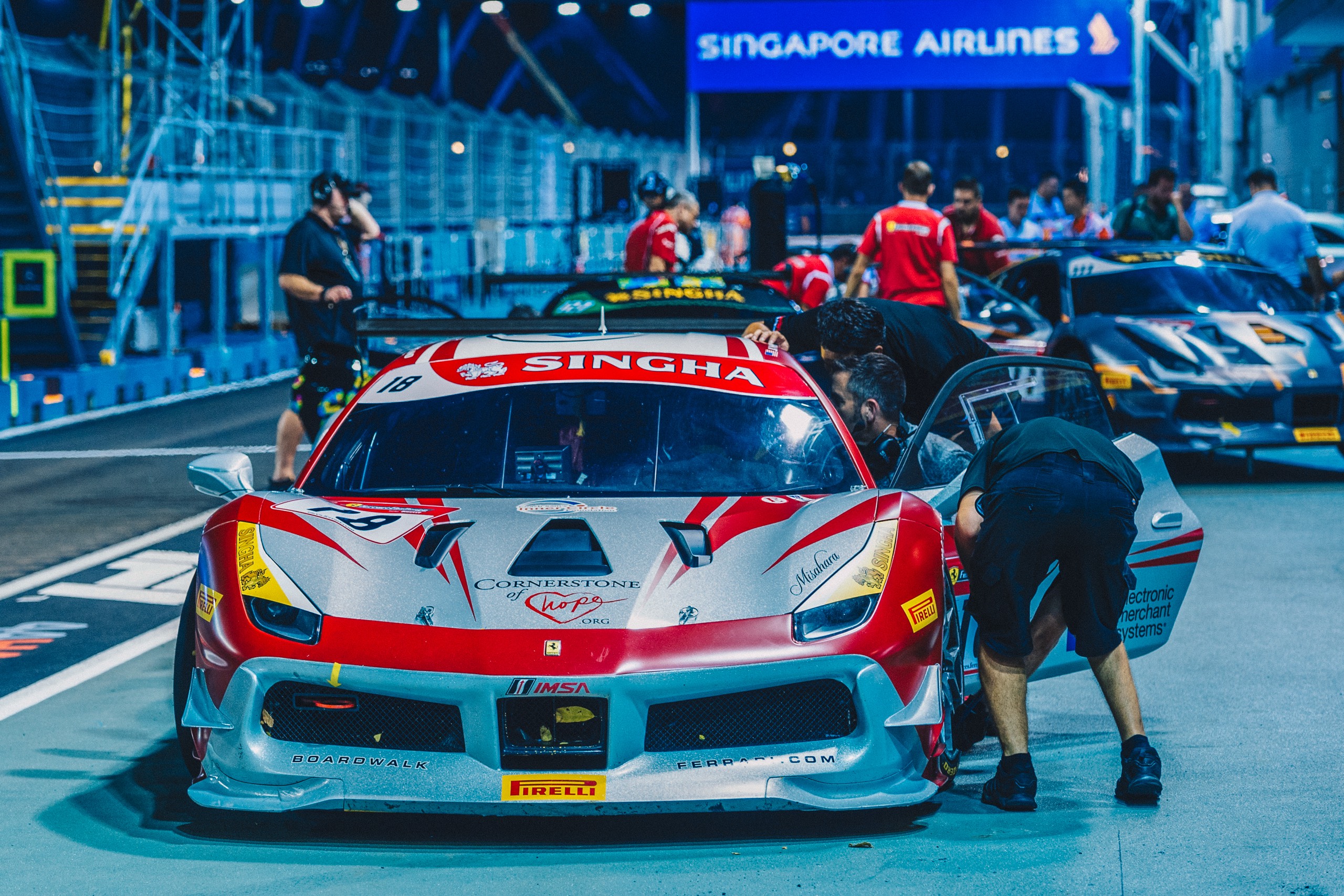 Hall of Fame basketball coach John Wooden once said, “Do not let what you cannot do interfere with what you can do.” Heading into Race 2 at the Singapore Ferrari Challenge, what driver James Weiland and the crew from Boardwalk Ferrari could not do was change the results of a Race 1 they’d rather forget. During the opening competition at the Marina Bay Circuit, Paris the ems+ Ferrari 488 Challenge was initially punted from fourth position and later issued a debatable drive-through penalty which culminated in a 24th place finish out of 25. That position was also where Weiland was forced to start Race 2 the following day. But during that second race of the weekend, the team would not let anything interfere with the task at hand. Paris would eventually pass 17 cars in just 10 laps of green flag to finish 7th overall in what can only be described as a storming day of racing.

“Well, Paris sure is something,” Weiland said following the race. “Despite starting in 24th position, she ran a storming race to pass 17 cars and snag 7th place overall. I was proud of the way the team responded to the adversity we faced to start the weekend, and how everyone did what they could to finish strong in Race 2. Many thanks to Engineer Travis Low, Head Mechanic David Cameron, and Coach Conrad Grunewald for making that happen.”

EMS Race Team competed in the Ferrari Challenge at Marina Bay Circuit as a support race to the Formula 1 Singapore Grand Prix. Thousands of racing fans were in attendance as Lewis Hamilton picked up his seventh win of the season, while Max Verstappen and Sebastian Vettel finished in second and third, respectively. Those F1 stars helped bring increased attention on the three charities that EMS Race Team proudly races to raise awareness for—Peta Cruelty Free, Coach Sam’s Inner Circle Foundation and Cornerstone of Hope. The opportunity to help spread the word for those missions during F1 weekend was not lost on Weiland and company.

“Anytime we’re able to be a part of F1 weekend is a great opportunity for us,” Weiland said. “With the number of fans that were in attendance throughout the weekend, hopefully some of them were introduced to PETA Cruelty Free, Coach Sam’s Inner Circle and Cornerstone of Hope for the first time. Any impression we were able to make would certainly mean a lot to us.”

People for the Ethical Treatment of Animals (PETA) is the largest animal rights organization in the world, with more than three million members and supporters. Products proudly displaying the bunny logo are cruelty-free, meaning that they were produced without testing on animals. Coach Sam’s Inner Circle Foundation’s mission is to provide educational support to at risk children through a combination of literacy, personal development and health and fitness programs designed to develop the whole child. Cornerstone of Hope, meanwhile, provides support, education, and hope for the grieving. EMS Race Team will continue to fly the flag for each of these foundations during the Ferrari World Finals at Monza on November 1-4.