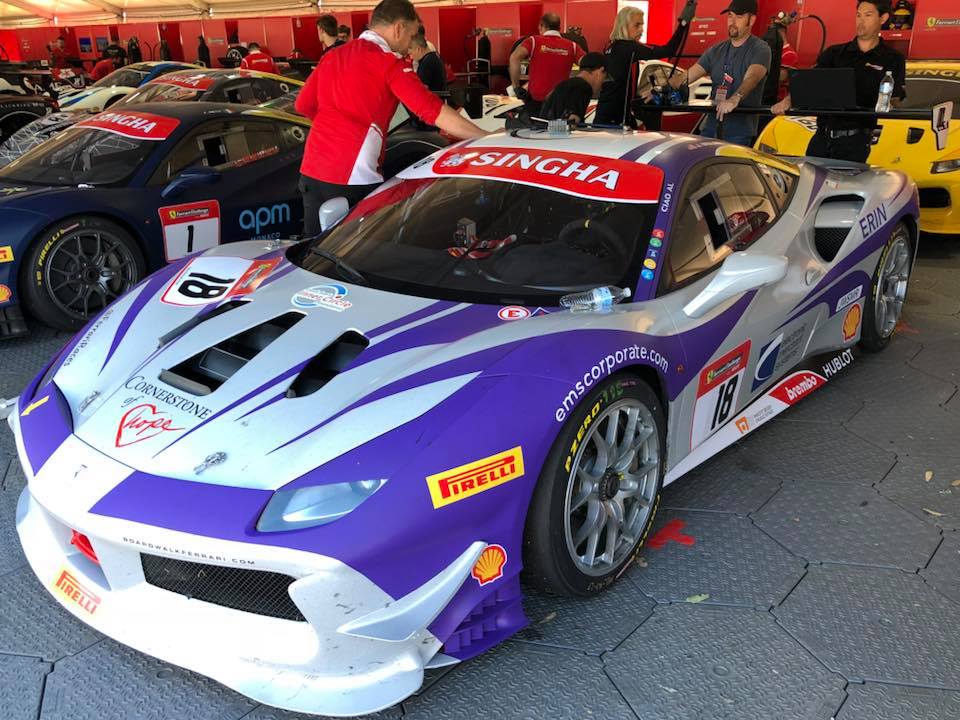 Riding the momentum of a second-place overall finish in the Trofeo Pirelli pro class during F1 weekend in Australia last month, EMS Race Team is now preparing to compete in New Zealand for the next round of the Ferrari Challenge on April 12-15. This trip marks the first time that driver James Weiland and ERIN the ems+ Ferrari 488 Challenge will ever race in New Zealand. Hampton Downs Motorsport Park will be hosting the action during a weekend that expects to be jam-packed with racing excitement out on the track.

“We’re certainly looking forward to racing in New Zealand as well as experiencing the culture,” Weiland said. “Hampton Downs is going to be a challenging track and hopefully we can get used to it pretty quickly during the practice rounds. Our goal will be what it always is, to stay focused as a team on improving collectively and performing our best throughout the weekend. If we’re able to accomplish that, we will put ourselves in position to compete for a spot on the podium.”

Hampton Downs Motorsport Park is located in northern Waikato, New Zealand near Auckland and Hamilton. As New Zealand’s most modern motorsport complex, it boasts three different track configurations along with two skidpad areas, one for driver training, the other for drifting as well as an SUV course and go-kart track. On October 18, 2009, Hampton Downs Motorsport Park was open for business and the first competition was held in January 2010. Today, after significant enhancements ever since, Hampton Downs is considered one of the most technically advanced race circuits in the world.

“PETA’s cruelty free bunnies gave us an extra boost in Australia and we’re hoping the same thing happens again here in New Zealand,” Weiland added. “We’re dedicating the race weekend to PETA cruelty free and everything they do for animals, so hopefully we can help raise some awareness with a solid effort. We’re also excited to be raising awareness for Coach Sam’s Inner Circle and Cornerstone of Hope while we’re in New Zealand as well. Like we do every race weekend, we encourage you to visit each website and learn everything you can about what each group is doing for our community.”

People for the Ethical Treatment of Animals (PETA) is the largest animal rights organization in the world, with more than three million members and supporters. Products proudly displaying the bunny logo are cruelty-free, meaning that they were produced without testing on animals. Coach Sam’s Inner Circle Foundation’s mission is to provide educational support to at risk children through a combination of literacy, personal development and health and fitness programs designed to develop the whole child. Cornerstone of Hope, meanwhile, is dedicated to providing support, education, and hope for the grieving. Guided by Christian values of compassion and service, they welcome and serve all seeking support.