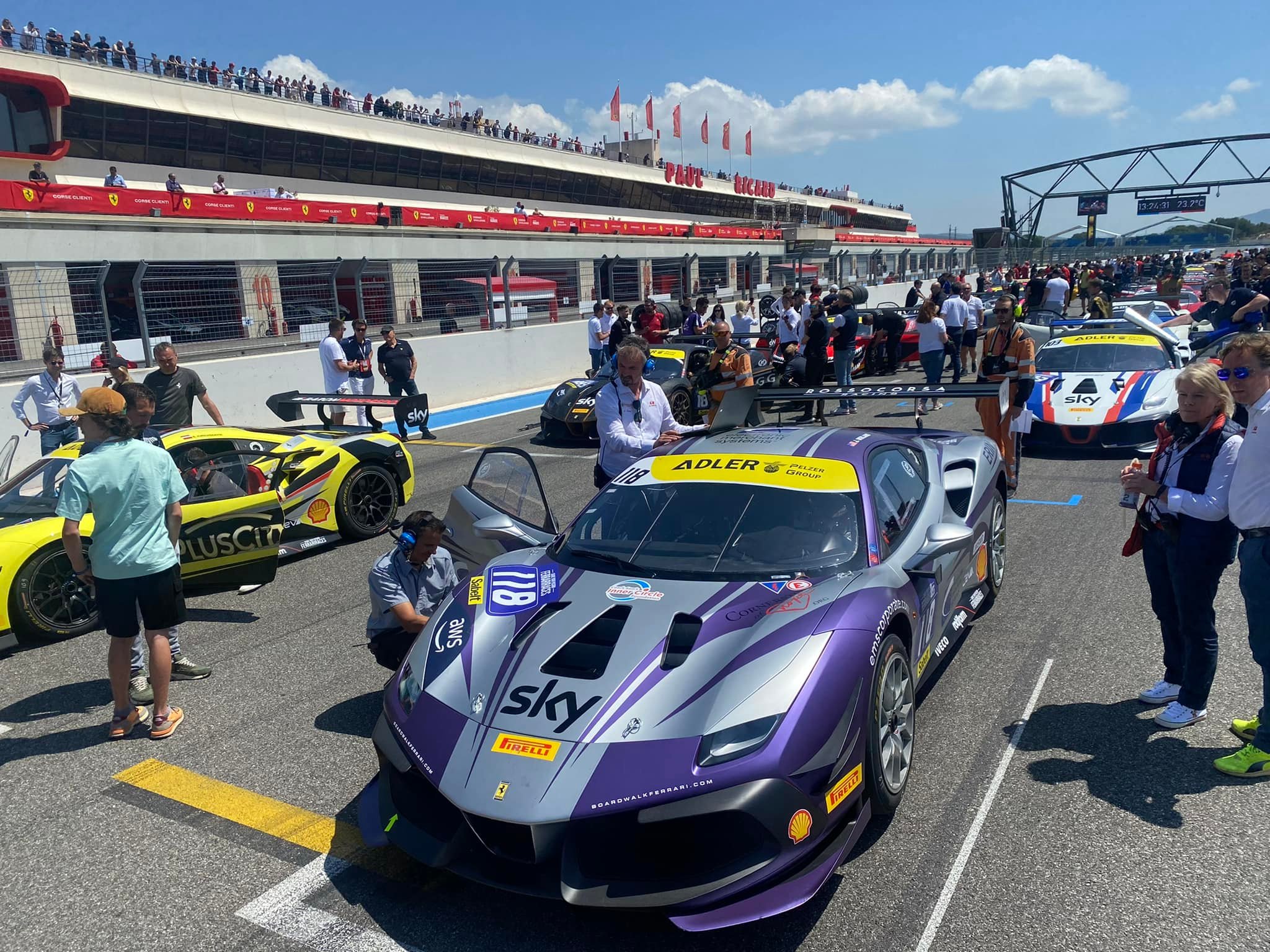 After opening the 2022 Ferrari Challenge Europe schedule with a podium finish in Portugal, EMS Race Team traveled to the south of France for Round 2 at Circuit Paul Ricard. While the results weren’t what the team had hoped for, driver James Weiland and his crew from Rossocorsa, R3 Motorsports, and Ferrari of San Francisco did their best to raise awareness for PETA Cruelty-Free, Coach Sam’s Scholars, and Cornerstone of Hope throughout the trip across the Atlantic Ocean.

After a P7 finish on Saturday, things did not go EMS Race Team’s way on Sunday. ERIN the Electronic Merchant Systems Ferrari 488 Challenge EVO continued to receive contact throughout Race 2 and was eventually punted during the final lap through no fault of her own. But the good news for the team—in addition to being able to accomplish their goal of raising awareness for three causes that are close to their hearts—was that the Reserve Driver, Max Weiland, continues to heat up the karting ranks while staking his claim to the top spot.

“It was a tough day at the office,” Weiland said on Sunday. “We were first hit at the start, and then hit a total of four times throughout the race. The last of the contact we received ended our race on the final lap for a finishing position somewhere around P30 after starting 5th and running P8 for most of the race. Nevertheless, it was good to be racing in the south of France and we look forward to visiting the Hockenheim Circuit for the first time during our next race.”

The Hockenheim Ferrari races will be held in Germany on July 22-24. EMS Race Team will look to make a push toward the top of a competitive Ferrari Challenge Europe field during the trip. In the meantime, they will continue to focus on the Reserve Driver who keeps working hard, doing his best, and improving every day.

“The good news is that the Reserve Driver snagged a couple more trophies in New Castle, Indiana while we were being punted from the track in France,” Weiland joked. “So, hopefully, we can build on the momentum he is creating while continuing to raise awareness for PETA, Coach Sam’s, and Cornerstone at a track in Germany that we’ve never visited before later this summer.”

People for the Ethical Treatment of Animals (PETA) is the largest animal rights organization globally. Products proudly displaying the bunny logo are cruelty-free, meaning that they were produced without testing on animals. Coach Sam’s Scholar’s mission is to provide educational support to at-risk children through literacy, personal development, and health and fitness programs designed to develop the whole child. Cornerstone of Hope, meanwhile, is dedicated to providing support, education, and hope for the grieving. EMS Race Team will continue to race to raise awareness for each of their important missions during the Germany Ferrari Races in July.

EMS Race Team opened the 2022 racing schedule with a podium finish in Portugal. While battling through a wrist injury throughout the weekend, driver James Weiland was forced to miss the first qualifying session of the season. Despite that setback, he eventually...