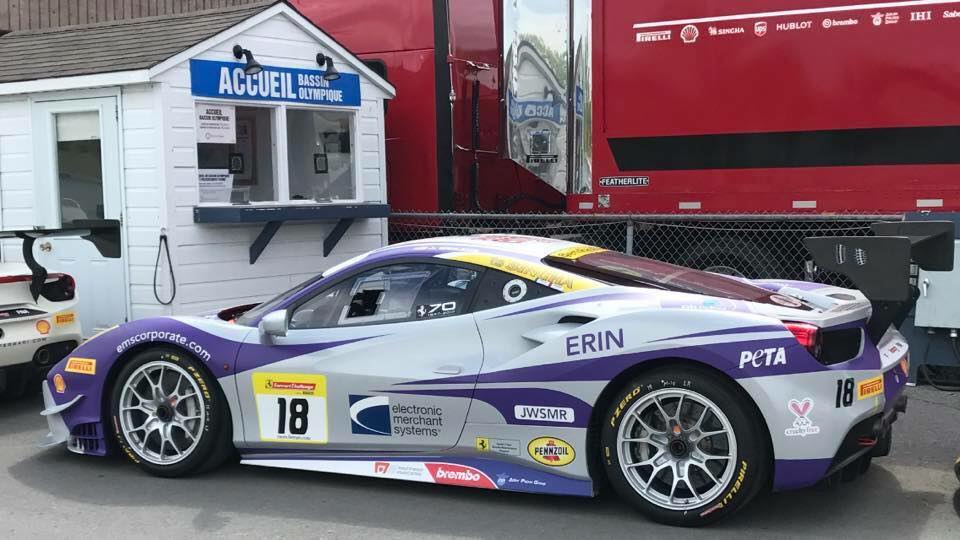 When championship driver Gilles Villeneuve was asked about his approach to racing he offered the following: “I will drive flat out all the time. I love racing.” During Round 2 of the Ferrari Challenge in Montreal—at the circuit that bears Villeneuve’s name—EMS Race Team demonstrated their love for racing by driving flat out all weekend long despite the adversity that came their way. In only their second race against professional drivers in the Trofeo Pirelli class, driver James Weiland and the Boardwalk Ferrari crew qualified second out of 45 overall. After an unfortunate incident ended their day early in Race 1, EMS came right back to finish strong on Sunday.

During qualifying for Race 1, Weiland and Erin, the ems+ Ferrari 488 Challenge, posted a lap time of 1:38.5 which was good for second overall. Erin would start outside Row 1 for Race 1, and finish the first lap running second before a puncture took out her right rear on Lap 2. While Weiland was able to save it, avoiding any contact following the puncture, the incident ended the day for Erin. The Race 1 finish would put EMS starting in the 38th position on Sunday, but Erin continued to compete despite that challenge. She’d fight for 22 places in 11.5 laps of green flag action prior to a yellow flag under which the race concluded 16th overall.

“Considering the way we qualified, and the way we finished on Sunday, we felt like we made a lot of progress for our second race weekend of the season,” Weiland said. “Obviously the puncture during Race 1 was unfortunate, but that’s racing. Our team did an excellent job getting Erin ready to race on Sunday, and it was great to be behind the wheel when she’s running like that. If we continue to do the things we were able to accomplish this weekend we should be in good shape for the Hungaroring.”

Round 2 of the Ferrari Challenge at Circuit Gilles Villeneuve served as a support race for the Formula 1 Canadian Grand Prix. Lewis Hamilton (Mercedes) finished first while Valtteri Bottas (Mercedes) and Daniel Ricciardo (Red Bull) rounded out the top three. The F1 event helped make for one of the biggest crowds of the Ferrari Challenge season, which always helps raise awareness for the missions close to EMS Race Team’s heart.

“The crowd of racing fans here in Montreal is always exciting to compete in front of during F1 weekend,” Weiland said. “But what is most important for us is to get the Cornerstone of Hope, Coach Sam’s Inner Circle Foundation and PETA Cruelty Free flags waving in front of so many new people. We had people asking us about each of the three great causes that are featured on Erin throughout the weekend and we’re always happy to spread the word about the great work that each group does for our communities.”

For more on Cornerstone of Hope, Coach Sam’s Inner Circle Foundation and PETA Cruelty Free check out their websites. For behind the scenes coverage of the Ferrari Challenge at Circuit Gilles Villeneuve visit EMS Race Team on Facebook, Twitter and Instagram. We will be back in action at the Hungaroring Circuit in Budapest, Hungary June 23-25.