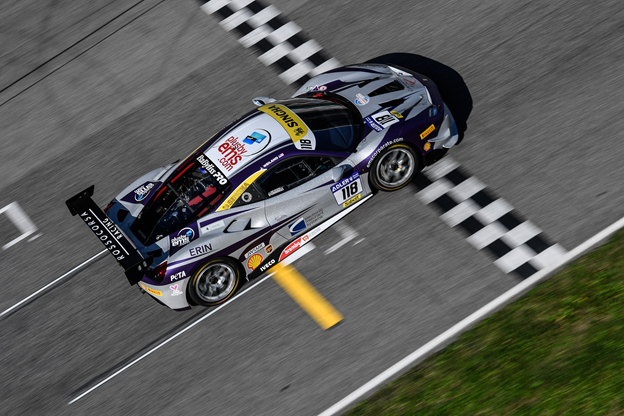 EMS Race Team closed the 2019 Ferrari Challenge Series with a bang. Racing the Mugello Circuit in Italy during the Ferrari World Finals, driver James Weiland and ERIN the Electronic Merchant Systems Ferrari 488 Challenge won three times. The team dedicated their three victories on the Ferrari Challenge’s biggest stage to each of the charities that EMS races to raise awareness for. Those missions include PETA Cruelty Free, Coach Sam’s Inner Circle Foundation and Cornerstone of Hope.

People for the Ethical Treatment of Animals (PETA) is the largest animal rights organization in the world. Products proudly displaying the bunny logo are cruelty-free, meaning that they were produced without testing on animals. Coach Sam’s Inner Circle Foundation’s mission is to provide educational support to at risk children through a combination of literacy, personal development and health and fitness programs designed to develop the whole child. Cornerstone of Hope, meanwhile, is dedicated to providing support, education, and hope for the grieving. EMS will continue racing to raise awareness for each of these critically important causes throughout the 2020 campaign.

Highlighted by wins last season in Bahrain, France, Germany and Italy, Weiland and his team secured 10 podium finishes throughout the year. During the 2018 Ferrari Challenge, they finished on the podium seven times. To put an exclamation point on 2019, the crew from Ferrari of San Francisco executed flawlessly at Mugello when it mattered most. They put their driver in a position to win and the overall performance of the team earned high praise from Ferrari Challenge coach Conrad Grunewald to conclude the year.

“This is my 19th year in this industry and I’ve never seen such a dominant display of driving in this series,” Grunewald said. “Three wins in an incredibly stacked field, including the World Championship race with all the drivers from around the world combined. Incredible job by Jim Weiland.”

While pleased with the effort, EMS Race Team knows they will need to be even better when they get back on the track in 2020. It will take a dedicated effort throughout the season by the entire team once again to navigate a highly competitive field of drivers and challenging tracks.

“You always want to improve and get better every year,” Weiland said heading into the 2020 Ferrari Challenge. “We had some good results last season and we are proud of the way we competed. But it’s a new year now and that comes with new goals.”

The 2020 Ferrari Challenge begins at the Daytona International Speedway in Florida on January 23-25 when the North American series gets underway. The Asia Pacific series opens for racing on March 5-7 at Bahrain, while the European Ferrari Challenge will hold its first competition of the new year on April 3-5 back at Mugello.

EMS Race Team’s official schedule for the 2020 campaign is listed below.