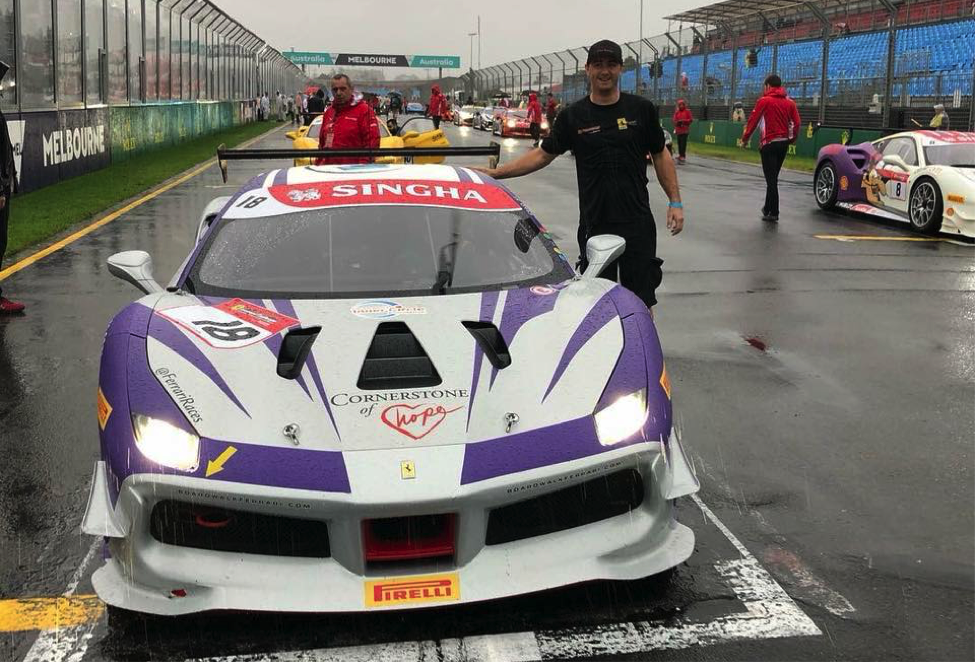 Dale Earnhardt once said of racing, “It’s a never-ending battle of making your cars better and also trying to be better yourself.” For EMS Race Team, that battle to be better continued at the Melbourne, Australia Ferrari Challenge. Competing in a support race during F1 weekend, driver James Weiland and Erin the ems+ Ferrari 488 Challenge nearly captured two podiums in the Trofeo Pirelli pro class. Weiland finished 2nd overall out of 27 drivers in Race 1 before finishing 4th in Race 2.

Race weekend began by Erin snagging overall pole in qualifying and starting P1 of 27 for Race 1. She went on to handle great in a gnarly rain race from there. The No. 30 car made an audacious pass on the opening lap, but Erin ran well enough to grab a podium finish in the second position. Race 2, however, was a bit of a disappointment. Erin hit some radiator fluid on the track and the resulting contact for the lead left EMS with a car that struggled to turn. Eventually, Erin lost touch with the top three cars but held on to finish fourth.

“Our goal is always to get better as a team and we felt like we did that this weekend,” Weiland said. “We were pleased to finish P2 in the pro class and get up onto the podium in Race 1. You have to give a lot of credit to the Boardwalk Ferrari Team, Conrad Grunewald, Travis Low, Rudy Courtade and Dave Cameron for that effort. And even though we just missed the podium in Race 2, it was still a very enjoyable trip to Australia for us. Being here for the first time, we really liked it and the people are fantastic.”

During the weekend, the extra boost that the PETA Cruelty Free Bunnies provided Erin did not go unnoticed by PETA supporters and fans following along with the race. That attention and social media activity led to PETA publishing an article highlighting the action in Melbourne. An excerpt from that article published at PETA.org is as follows:

“Formula One fans had a cruelty-free surprise this weekend at the Melbourne Ferrari Challenge. James Weiland drove a gorgeous Ferrari emblazoned with the PETA logo and PETA’s Beauty Without Bunnies logo, which is used to identify cruelty-free products. This was the first time that the EMS Race Team raced in Australia. The team finished second in the challenge and first in every animal advocate’s heart.”

“It’s always exciting for us to represent Cornerstone of Hope, Coach Sam’s Inner Circle and PETA Cruelty Free when we travel to a new country for the first time,” Weiland added. “But it really felt like the PETA Cruelty Free Bunnies added some extra speed for us this weekend—especially in Race 1. I’m not sure we would’ve gotten up onto the podium without them.”