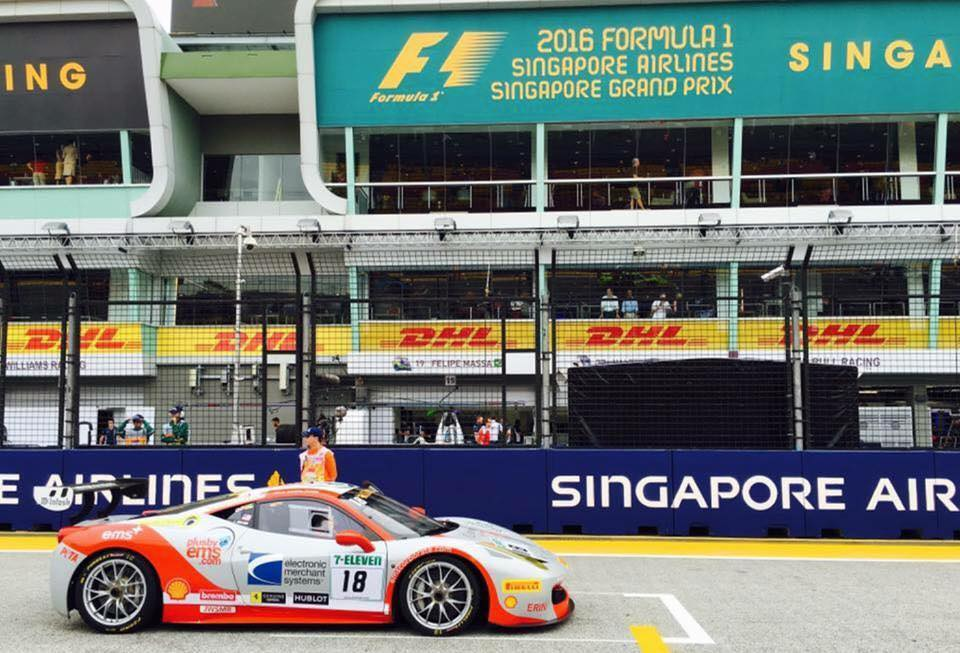 Paris the Electronic Merchant Systems Ferrari 488 Challenge began her voyage to Singapore during Labor Day Weekend. On September 14-16, driver James Weiland and the crew from Boardwalk Ferrari will meet Paris at the Singapore Grand Prix’s Marina Bay Street Circuit for a Ferrari Challenge competition that will serve as a support race during Formula 1 weekend. With 23 corners weaving into and out of three long straight-a-ways, the street circuit in Singapore will require extreme skill and focus as Weiland and company compete on the same track as F1 stars Lewis Hamilton, Sebastian Vettel, Kimi Räikkönen and others.

“Singapore will be another great test for our team this season,” Weiland said. “With the Formula 1 going off during the weekend, it will make for a tremendous racing environment. The competition among the Ferrari Challenge drivers will be stiff as usual too. But our goal will be the same as it always is—focus on the task at hand and put forth our very best effort as a team. We’ve raced Marina Bay in the past so there’s some familiarity with the track. Hopefully we can capitalize on that when we get there.”

Similar to the F1 weekend in Montreal that coincided with the Ferrari Challenge earlier this season, the F1 race festivities surrounding the event in Singapore are sure to make the trip even more special. Additionally, it will also provide a great opportunity to raise awareness for the three charities who are featured throughout Paris’ design—PETA Cruelty Free, Coach Sam’s Inner Circle and Cornerstone of Hope. The more success that EMS achieves on the track, the more opportunity to shed light on each of those causes.

“We always like to get up onto the podium during weekends like this especially because it helps raise awareness for PETA Cruelty Free, Coach Sam’s Inner Circle Foundation and Cornerstone of Hope,” Weiland added. “With the large crowds in attendance, it’s a great way to help make an impression on fans and drivers for each of those missions. Hopefully we can put our best foot forward as a team and accomplish that goal.”

EMS will be attempting to raise awareness for each of those foundations by building on the six podium finishes they’ve earned during a season that’s made stops in Florida, Texas, Australia, New Zealand, Belgium, Montreal and the Czech Republic. People for the Ethical Treatment of Animals (PETA) is the largest animal rights organization in the world, with more than three million members and supporters. Products proudly displaying the bunny logo are cruelty-free, meaning that they were produced without testing on animals. Coach Sam’s Inner Circle Foundation’s mission is to provide educational support to at risk children through a combination of literacy, personal development and health and fitness programs designed to develop the whole child. Cornerstone of Hope, meanwhile, provides support, education, and hope for the grieving.