It’s never easy traveling halfway around the world and doing anything, let alone driving at high rates of speed upon arrival in the Asian Pacific Ferrari Challenge. This most recent trip to the Fuji Speedway in Japan marked the third time that driver James Weiland and EMS Race Team competed in Asia this season. Previous stops included the Suzuka Circuit in Japan, and then the Marina Bay Street Circuit in Singapore. Each race weekend presented its own set of unique challenges, and Fuji would be no different.

“It’s always a real test for our team to travel here to Japan and compete at a high level,” Weiland said. “The majority of that test is in the extremely talented and aggressive drivers who compete here. We know when we compete on the Asian Pacific Series that nothing will be handed to us out on the track—nor should it be. We come prepared to earn everything we get, and raise awareness around the globe for the amazing work that PETA Cruelty Free and the Cornerstone of Hope do for our communities.”

EMS caught the attention of the overseas crowd early with some exciting racing in the opening competition on Saturday. During Race 1, after a disappointing qualifying session, EMS grabbed two positions at the start and held that spot all the way through the checkered flag with disciplined driving on a challenging course. The finish would be good for third in the Trofeo Pirelli AM class. It would also add another piece of hardware that the EMS reserve driver insists Weiland bring home from each race. Race 2 wouldn’t be as kind, however, as the EMS+ Ferrari Challenge 458 EVO, Erin, would receive broadside contact that ended her afternoon early.

“Erin was really moving for me this weekend,” Weiland added, of the Ferrari Challenge car that is well maintained and prepared by the Boardwalk Ferrari team. “She jumped out early in Race 1 and gained a couple spots at the start of the race, and was doing her best to make her way through some congested traffic spots today. I was pleased with the way she ran and all credit goes to the crew from Boardwalk Ferrari for being as diligent and prepared as they always are. Same can be said for my coach Conrad Grunewald.”

EMS Race Team returns to action for the Ferrari Challenge Race in Homestead, Florida next month. Weiland will arrive with a share of first place overall in the Trofeo Pirelli AM class—a position he earned last time out in Lime Rock. The North American Ferrari Challenge standings remain unaffected by the podium finish in Fuji due to that being an Asian Pacific series event. For more pictures and behind the scenes coverage of EMS Race Team’s trip to Fuji, Japan follow @emsRaceTeam on Facebook, Twitter Vimeo and Instagram. 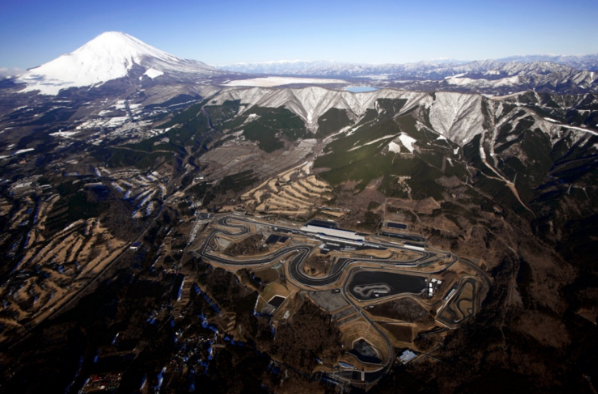 EMS Race Team returns to Japan this week to compete in the Ferrari Challenge at Fuji Speedway on October 14-16. The last time driver James Weiland and his crew from Boardwalk Ferrari performed on a Japanese stage they closed the curtain on a race weekend that resulted in two first-place finishes. During that March trip overseas, Weiland tested his skills against some of the best drivers in the world at the Suzuka Circuit. This time, he’ll be racing at the only other Japanese track to host a Formula One event in the world-famous Speedway at Fuji.

“We’re excited to get back to Japan,” Weiland said. “It seems like only yesterday we were there racing at Suzuka, but that was actually over seven months ago. Time flies. But even though we were locked in last time, we know this is an entirely different challenge. Fuji has one of the largest straights in racing to go along with a series of hairpin turns, so it’s going to be a fast track and we will have our hands full. Hopefully, we can put forth our best effort all weekend long and rise to the occasion as a team against a very talented field of drivers.”

Fuji Speedway was built in the early 1960s and rests in the foothills of Mount Fuji. They’ve hosted many significant races throughout the years, including the Formula One Japanese Grand Prix. One of the most memorable races came in 1976, when James Hunt and Niki Lauda—featured in the movie Rush—battled through rainy conditions to decide the F1 season standings on the track at Fuji. Hunt earned enough points to win the title after Lauda withdrew due to dangerous conditions. Meanwhile, a young Mario Andretti won the race while beginning his eventually ascension to the top of the Formula One world. Other notable F1 winners at Fuji also include Felipe Massa and Lewis Hamilton.

“It’s an historic track without question,” Weiland added of Fuji. “We’re especially excited with the opportunity we have to wave the flags for Cornerstone of Hope and PETA Cruelty Free while we’re racing there. The Asian Pacific Series does a tremendous job, and it will be a vibrant scene on Saturday and Sunday that we’re looking forward to taking part in. Hopefully we can put our best foot forward and raise awareness for both missions with a podium finish.”

Weiland is currently tied for first place in the North American Ferrari Challenge season standings. Points earned in Fuji will not directly relate to those North American totals. However, this will be a great test in preparation for races at Homestead and Daytona which follow the event in Fuji. For more behind the scenes coverage throughout race weekend in Japan, visit @emsRaceTeam on Facebook, Twitter, Instagram and Vimeo.