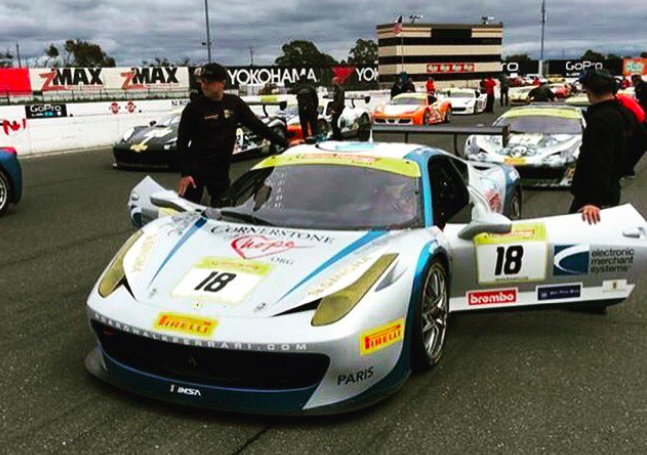 Legendary Formula One driver and former world champion Jackie Stewart once said, “It is not always possible to be the best, but it is always possible to improve your own performance.” During the Ferrari Challenge at Sonoma Raceway, EMS Race Team did not follow their winning weekend in Japan with a victory in California. But the experience did help driver James Weiland and the crew from Boardwalk Ferrari continue to improve their performance heading into the Circuit of the Americas next month.

Making her second Ferrari Challenge appearance, Paris—the ems+ Ferrari Challenge 458 EVO—demonstrated an epic pace on early on. She posted a Pirelli AM class-leading lap time of 1:58.537 during Practice 3 before qualifying was rained out. Unfortunately, though, the high drama that followed didn’t break the way of EMS who finished P7 and P8 in Races 1 and 2.

“Seems like every time we post a good practice time on Facebook we get snagged somehow during the Race,” James Weiland joked afterwards. “It might be time for us to rethink that strategy. But in all seriousness, we were proud of the start we had in Race 1 and felt good about the way we responded to some adversity throughout the weekend. We really feel like we learned some things that will help us in May at Circuit of the Americas, so that’s definitely a positive takeaway for us.”

During Race 1, Weiland was leading for most of the way before being bumped out of first position in the hairpin. Paris subsequently spun in a chase that followed, before rejoining the pack and finishing 7th. In Race 2, Weiland was forced to go onto the grass to avoid contact with another competitor early on and never recovered. Although he was lucky enough to avoid the collision, the lost time made it too difficult to finish better than 8th.

“We didn’t have the same results as we did at Suzuka, but it was still some fun racing in Sonoma nevertheless,” Weiland added. “It’s always an honor for us to represent the Cornerstone of Hope and PETA Cruelty Free and we never take that opportunity for granted. We were also pleased with how well Paris ran during her practice sessions and at various times throughout each race. We continue to get better as a team from every experience, and hopefully we even earned a little bit of good luck heading into the next competition.”

That next competition on the Ferrari Challenge North American Series for EMS Race Team will be held on May 13-15 in Austin, Texas at the world famous Circuit of the Americas. For info leading up to the race, be sure to follow @emsRaceTeam on Facebook, Twitter and Instagram.

Celebrities Show Up To Support in Sonoma

During the Ferrari Challenge weekend in Sonoma, multiple celebrities could be found taking in the action and supporting the drivers. Recording artist Adam Levine of Maroon 5 even stepped onto the track to kick things off at the starting line prior to Race 1.

Also in attendance was Kevin Dillon, the actor who played Johnny “Drama” Chase in the HBO hit-series Entourage. No word yet on whether or not Levine or Dillon have any competitive racing in their future, but they just might have the itch after watching the Ferrari 458’s roar around the track all weekend long.