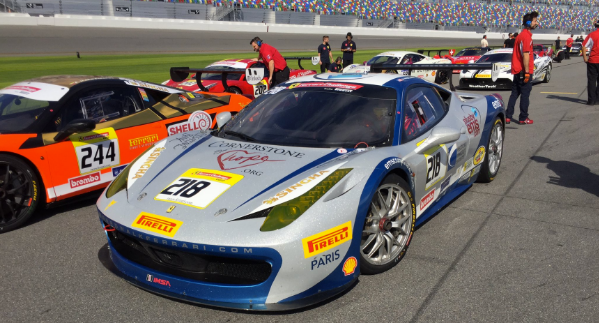 The pageantry, extravagance and overall brilliance of the Ferrari World Finals were on full display at the Daytona International Speedway in Florida on December 1-4, and the 2016 Finali Mondiali proved to be nothing short of spectacular. But when it came time to go racing with Ferrari Challenge competitors from all over the world, driver James Weiland and EMS Race Team were all business.

Throughout the three-day event, the Boardwalk Ferrari crew demonstrated the same heart and attention to detail they had all season long to put EMS in a position to succeed. Entering the weekend trailing by only three points in the North American Ferrari Challenge Trofeo Pirelli AM points standings, one mistake could cost EMS Race Team the season championship. Everyone in the garage understood the stakes, and everyone delivered.

“With 40 cars in a race start, our strategy was really to make it through Turn 1 unscathed—which Jim did a great job of today,” Coach Conrad Grunewald said, following a fourth-place finish for Weiland in Race 2 that secured the Trofeo Pirelli AM class season title by one point.

“After that, it’s see where he is, as far as Steve Johnson, who is our main competitor for the season championship. Then base our strategy off that. With Steve in front of (Weiland) in P3, there was no need to risk any overdriving or making a mistake. And it left us with a one-point lead for the championship. Couldn’t be more proud of Jim, he did a great job this season.”

Coach @ConradGrunewald talks from Victory Lane at @DISupdates about the Race 2 strategy that helped secure the season championship pic.twitter.com/IH7rk0zHfT

Coach Grunewald was speaking from Victory Lane at DIS after a technically sound performance on Saturday from Weiland. Understanding how many points were needed during the final race of the 2016 season to win the championship, EMS Race Team drove free of mistakes. This followed a Race 1 effort that ended with Weiland and his reserve driver who helped prepare for each race on the first-place podium, earning enough points on Friday to move into the top spot overall.

“As you can see it just brings a big smile to my face,” Boardwalk Ferrari Team Partner Rudy Courtade said in response to Boardwalk Ferrari and Ferrari of San Francisco teammates James Weiland (P1 Trofeo Pirelli AM), Matt Keegan (P1 Coppa Shell) and J.C. Saada (P2 Coppa Shell) all finishing in the top two spots in class during Race 1. “It’s incredible how these guys can just pull off a 1-1-2 finish, with Jim, Matt and JC here at the Daytona World Finals. Everybody is super excited and we’re stoked going into the second race.”

Inside the @ferraridallas garage with Technical Director, Rudy Courtade, as the team prepares for Race 2 at @DISupdates on Saturday morning pic.twitter.com/7UOdXQI5ie

While some outside the Boardwalk Ferrari and Ferrari of San Francisco garages may have been surprised that Weiland moved from second to first overall on the final Ferrari Challenge weekend of the year, one racing analyst was not.

“I think Paris is going to bring home the W,” Beckham Harkins, a racing analyst and son of former NHL player Brett Harkins who has appeared on ESPN, Fox, and other sports media outlets said before Race 1 began. “Go fast. I think she’s going to bring another championship back to Cleveland.”

The ems+ Ferrari Challenge 458 EVO trimmed in blue did bring that championship back to Cleveland as Harkins predicted. But the victory would never be won without the group of mechanics who kept Paris in racing order on a challenging track at Daytona.

“Car and the driver are both really, really fast,” head mechanic Dave Cameron said prior to qualifying on Friday morning. “We have a solid piece of equipment, just did a solid inspection. Ready to bring our A-game at the World Finals.”

Inside the @ferraridallas garage after Qualifying as the team prepares for Race 1 tonight at @DISupdates under the lights #FinaliMondiali pic.twitter.com/J2PiLeLAj8

With Erin, the ems+ Ferrari Challenge 458 EVO trimmed in red, initially slotted to run in the Finals, her sister, Paris, was forced to step in. The blue ems+ car qualified second in class for Race 1 before securing the hard-fought victory on opening night. The win, coupled with a best lap point, allowed Weiland to be leading the Trofeo Pirelli AM class by three heading into Race 2. The Bass Pro Shops car, driven by Steve Johnson, entered the final race in second position before finishing the season on the podium, earning 12 points with a third. But the ems+ car finished fourth and earned 10—which was just enough for the one-point season advantage.

“I’m really proud to be part of this Boardwalk Ferrari team,” Weiland said following the racing action at the Finali Mondiali. “But that’s nothing new. I love how hard they work, love their passion for what they do, and it’s showed in our results all season long. Huge thanks to Ken Ambrose, Nathan Dunning, Emmanuel Turin,         Ryan Negri, Rudy Cortade, Dave Cameron, Daryl Cameron, Donald Cameron, Andrew Prendeville and my coach, Conrad Grunewald. To share this championship with those guys, it really makes it special. We all got together to raise as much awareness for PETA Cruelty Free and the Cornerstone of Hope Foundation as we could when the season began, and that’s what we did.”

Following the first-place finish Friday, and fourth on Saturday, EMS Race Team was back at it again on Sunday to compete for the World Finals. This race would be the first time that the Asian Pacific Series, European Series, and North American Series directly competed against each other, despite sharing a track throughout the weekend. EMS would receive rear contact on Sunday, however, and end the afternoon early. But they wouldn’t leave Daytona without the North American Ferrari Challenge Trofeo Pirelli AM championship trophy that the reserve driver required when the season began.