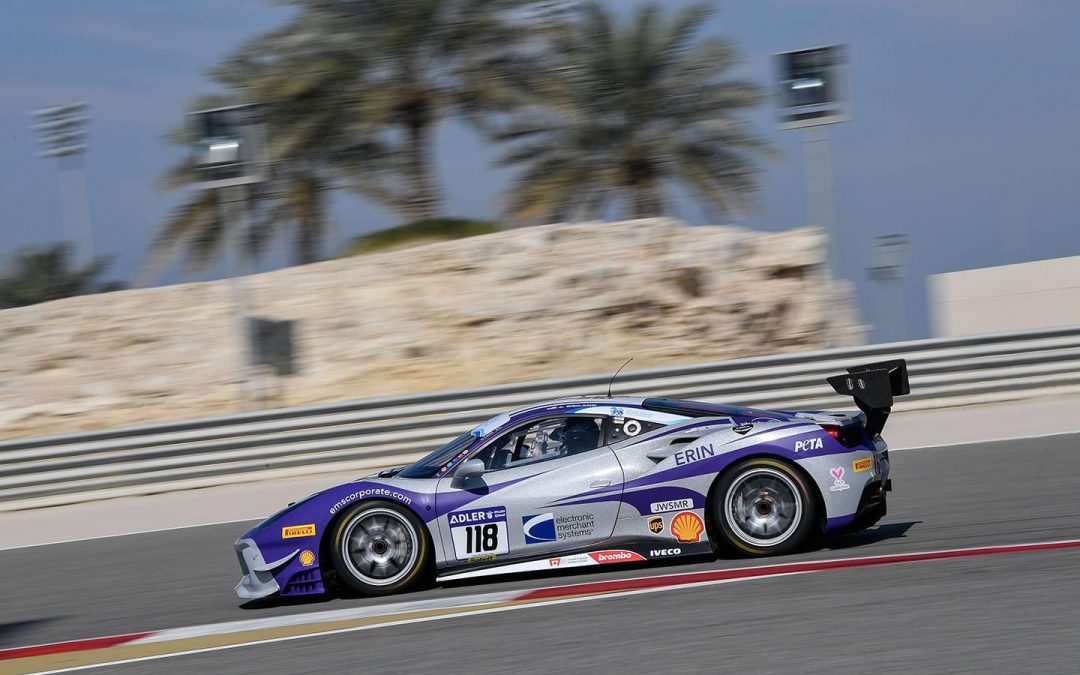 EMS Race Team opened the 2019 Ferrari Challenge with a wire-to-wire victory. Traveling to Sakhir, Bahrain to compete against a talented field of drivers at the Bahrain International Circuit, EMS led Race 1 from start to finish before securing a place atop the podium. Racing for the first time since earning a podium finish at Monza in Italy during the 2018 Ferrari Challenge World Finals in November, ERIN the ems+ Ferrari 488 Challenge proved to be in midseason form all weekend long. To accompany the first-place hardware that driver James Weiland and his team would earn on the trip, ERIN also notched a pair of pole positions during each of her qualifying sessions. It was the type of race weekend that will go a long way toward building positive momentum for the young season.

“ERIN does it again,” Weiland said following the victory in Bahrain. “She celebrated 10,000 kilometers with pole position and then the win. Big thanks to Ferrari of San Francisco, R3 Motorsports and the Rossocorsa Team who had her running like the wind all weekend.”

The Ferrari racing event marked the first time that the Bahrain International Circuit played host to the Ferrari Challenge series. The widely renowned track built in 2004 has hosted the Formula 1 Grand Prix every year since its inception while also featuring other high profile racing competitions. Sebastian Vettel, Lewis Hamilton and Michael Schumacher are among the F1 drivers who have earned victories on the track at Bahrain throughout its history.

“It was a tremendous experience for our team to be able to come to Bahrain, meet the people here, experience the culture and compete at such a terrific venue,” Weiland added. “The people we met were extremely welcoming and it was great to race here while doing our best to raise awareness for PETA Cruelty Free, Coach Sam’s Inner Circle and Cornerstone of Hope.”

People for the Ethical Treatment of Animals (PETA) is the largest animal rights organization in the world, with more than three million members and supporters. Products proudly displaying the bunny logo are cruelty-free, meaning that they were produced without testing on animals. Coach Sam’s Inner Circle Foundation’s mission is to provide educational support to at risk children through a combination of literacy, personal development and health and fitness programs designed to develop the whole child. Cornerstone of Hope, meanwhile, provides support, education, and hope for the grieving. All three were prominently featured on ERIN’s design as she raced to victory in Bahrain.

After stepping onto the first-place podium following Race 1, Sunday’s action was cut short due to contact that ERIN received early on in Race 2. Despite laying down the fastest time during qualifying again for the second-straight day, the Race 1 winner was forced to start in the ninth position for Race 2 as a result of a new podium handicapping rule which was implemented in the Ferrari Challenge series this season. While navigating through the middle of the pack into Turn 1, ERIN received contact to her right rear which broke her suspension. But while the collision ended her day, it didn’t damper the spirits of a team who certainly started the 2019 season the right way.

The next two events for EMS Race Team will be in Austin, Texas and Melbourne, Australia as the Ferrari Challenge world tour continues. For more behind the scenes action from Bahrain, follow EMS Race Team on Facebook, Twitter and Instagram.