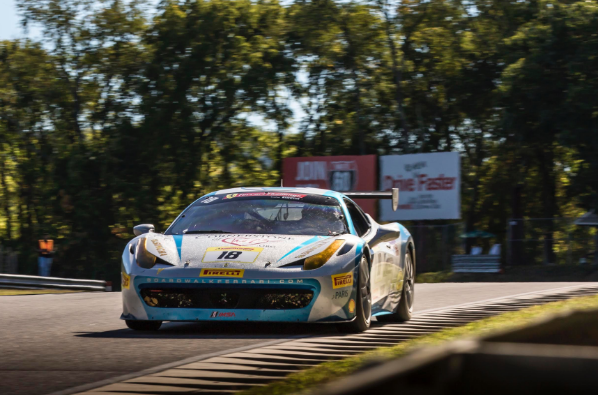 EMS Race Team arrived at Lime Rock Park in Connecticut this weekend trailing the top position in the Ferrari Challenge North American Series by one point overall on the season in the Trofeo Pirelli AM class. Despite being met with a number of obstacles while competing at the historic road racing venue, James Weiland and his crew from Boardwalk Ferrari would eventually leave with a share of first place heading into the final two events of the year. But that journey to the top—for the moment, at least—was certainly not easy.

During Race 1 at Lime Rock, after qualifying in the second position, Paris—the ems+ Ferrari Challenge 458 EVO trimmed in blue—was bumped off the track early on by a competitor’s car. After not being allowed the proper room to return, Paris was forced to lose two positions and eventually finished in 4th place. Following the race, however, video was reviewed of the incident and EMS was awarded 3rd place points. In the qualifying session for Race 2 on Saturday morning, though, Paris experienced an electrical malfunction that shut the car down entirely before being able to complete one lap. That start near the back of the pack in Race 2 would lead to a 4th place finish to close out the trip.

Coach @ConradGrunewald breaks down the keys to success at @limerockpark prior to Race 2 which begins at 3:10pm EST: https://t.co/n1eCt7wpA5 pic.twitter.com/1T0dsJCvHm

“This is a fun but also challenging track to drive,” Weiland admitted. “There isn’t a lot of room to pass, which certainly played a role in the incident we experienced on Friday. That same issue made it tough for us during Race 2 as well, after being forced to start where we did. But I was proud of our crew for working through some technical issues, and we’re always honored to represent PETA Cruelty Free and Cornerstone of Hope even when the breaks don’t necessarily go our way.”

Inside the @ferraridallas Garage w/ Rudy Courtade who explains how his team got Paris ready for Race 2 at @limerockpark #FerrariChallenge pic.twitter.com/SegXyyKOFo

The fact that Paris was able to finish each race at Lime Rock in the respectable positions that she did—despite not resulting in any trophies—certainly helped in the big picture. After finishing third in the Trofeo Pirelli AM class last season, Weiland is now tied with Steve Johnson of Ferrari Fort Lauderdale in first place this year. Following a trip to Fuji to compete in the Asia Pacific series, EMS will return to the United States to close out the North American circuit with races at Homestead and Daytona.

“If you start thinking about things like the points lead, or what place you might finish in during a season, you could lose focus on the task at hand,” Weiland added. “For our team, it’s always about how you can get better, how you can improve. I’ll work with my coach, Conrad Grunewald, and try our best to improve on the things I could’ve done better in Lime Rock and hopefully carry what we learned into the next weekend. And if we can continue do that, focus on one practice, one qualifying session, one race at a time, everything else will take care of itself.”

For more behind-the-scenes coverage from the Lime Rock Park Ferrari Challenge be sure to follow @emsRaceTeam on Twitter, Facebook and Instagram. Also, be sure to visit EMS Race Team’s Vimeo Page for on track action throughout the season. 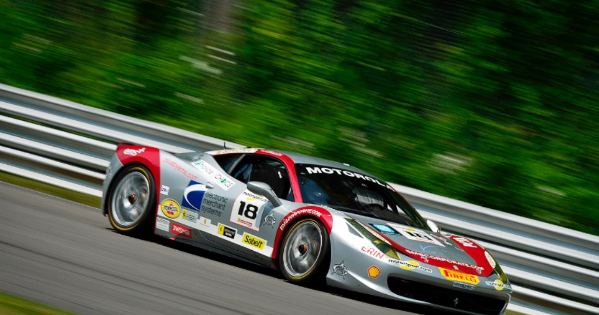 It will be a quick turnaround for EMS Race Team as driver James Weiland and the Boardwalk Ferrari crew now head to New England for the Ferrari Challenge event at Lime Rock Park. After returning home to Cleveland, Ohio from the Asia Pacific Series event in Singapore last weekend, EMS will be back on a stateside track in hopes of a podium finish. The Ferrari Challenge at Lime Rock begins with Race 1 on Friday at 4:05pm EST followed by Race 2 at 3:10pm EST on Saturday for the Trofeo Pirelli and Trofeo Pirelli AM drivers. The Coppa Shell class will be racing at 5pm on Friday and 2:10pm on Saturday.
END_OF_DOCUMENT_TOKEN_TO_BE_REPLACED 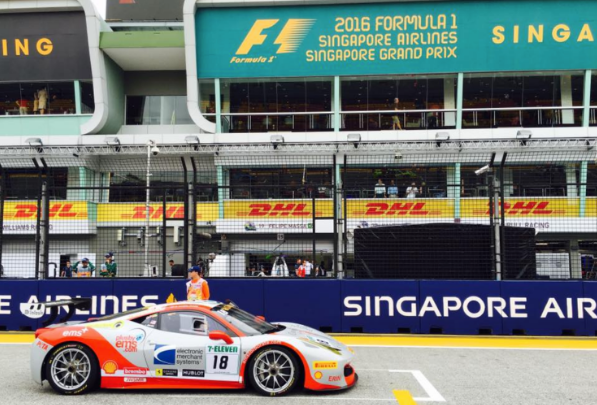 Legendary driver Dale Earnhardt once described racing by saying, “It’s a never ending battle of making your cars better and also trying to be better yourself.” Despite the success that EMS Race Team driver James Weiland and his team from Boardwalk Ferrari have achieved this season, that lesson of always trying to improve remains at the core of everything they do on the Ferrari Challenge Circuit. Their trip to Singapore to compete at the Marina Bay Street Circuit this past weekend served as another chapter in that never ending learning experience.

END_OF_DOCUMENT_TOKEN_TO_BE_REPLACED 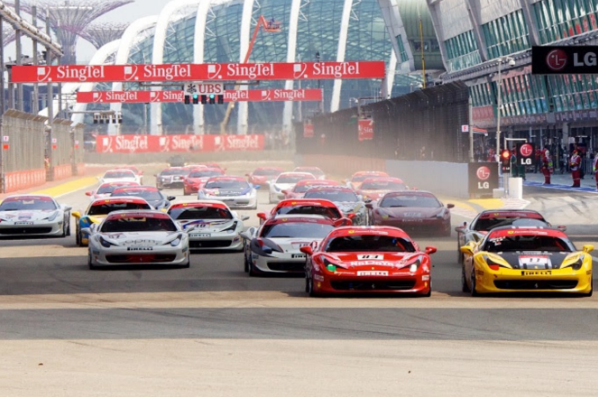 EMS Race Team travels to Singapore this week in hopes of earning a podium finish in the fifth different country they’ve competed in this season. Coming off a strong performance in Sochi, Russia, driver James Weiland and his crew from Boardwalk Ferrari will be racing for the first time at the renowned track in Marina Bay, Singapore from September 16-18. The course will also play host to the Formula One’s Singapore Grand Prix during Ferrari Challenge weekend, adding energy and excitement throughout a tremendous venue for racing. With 23 corners weaving into and out of three long straight-a-ways, the street circuit in Singapore will require both extreme skill and focus to emerge victorious.

“We’re looking forward to racing in Singapore at Marina Bay,” Weiland said. “Our team competed in the Asia Pacific Series earlier this season at the Suzuka Circuit, so we know first-hand the type of talented drivers we will be racing against. My coach, Conrad Grunewald, and I spent time in Miami at the GPX Labs simulating the racing experience, and hope that will help prepare us for success during our first trip to Marina Bay. Win or lose, though, our goal as always is to improve as a team and get better with every race. If we do that, we’ll give ourselves a good chance at success.”

Similar to the F1 weekend in Montreal that coincided with the Ferrari Challenge Weiland and company competed in earlier this season, the F1 race festivities surrounding the event in Singapore is sure to make the trip even more special. Additionally, it will also provide a great opportunity to spread the word about the two charities who are featured on the EMS+ Ferrari Challenge 458 EVO—PETA Cruelty Free and Cornerstone of Hope. The more success that EMS is able to achieve in Singapore, the better chances are of introducing fans and drivers alike to the great role that each organization plays in our community.

“What we are most proud of when making trips like this to a new country we haven’t competed in before is the opportunity to spread the word about PETA Cruelty Free and Cornerstone of Hope to a group of people who may not have been introduced to their mission before,” Weiland explained. “With Singapore hosting the F1 race this weekend as well, the enthusiasm throughout Marina Bay expects to be great. So we’re humbled and honored to carry the flags for those two tremendous causes, and we’ll be even more excited if our team is able to carry those flags onto the podium when the races conclude on Saturday and Sunday.

In Sochi, Weiland drove the EMS+ Ferrari Challenge 458 EVO trimmed in purple, Nicky. This weekend he will be competing in the EMS+ Challenge car trimmed in red, Erin. For pictures and behind-the-scenes coverage of the Ferrari Challenge at Singapore, be sure to follow @emsRaceTeam on Twitter, Facebook and Instagram. Also, be sure to visit EMS Race Team’s Vimeo Page for on-track action following the trip.