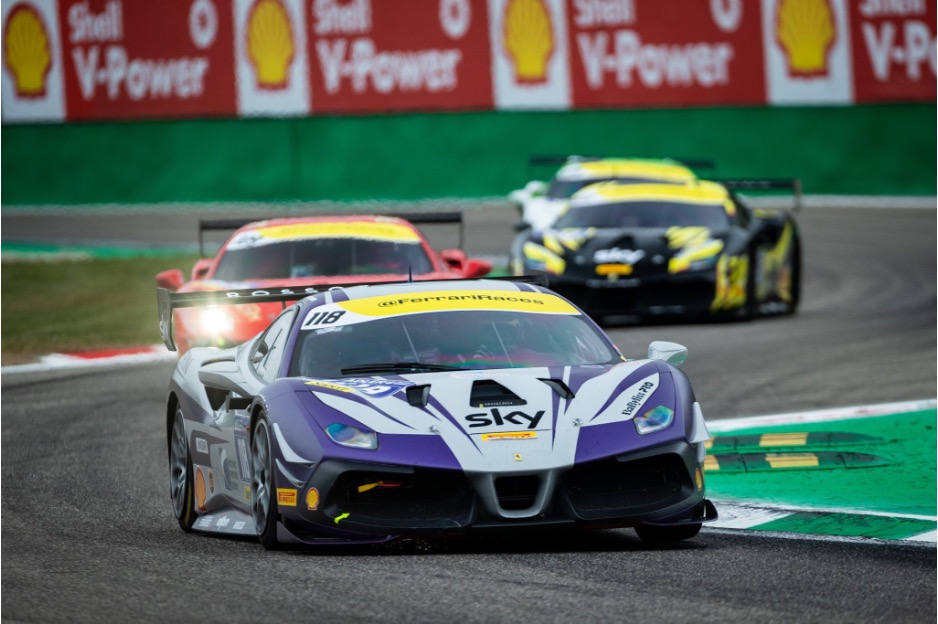 EMS Race Team arrived in Italy for the 2021 Ferrari Challenge at the Autodromo Nazionale Monza with a sense of purpose. Despite six months separating the team from their last race, ERIN the Electronic Merchant Systems Ferrari 488 Challenge Evo found a way to secure a P1 finish during an exciting race to open the weekend. After qualifying P4 for Race 1, the Electronic Merchant Systems car would navigate her way through the Temple of Speed for the victory. The win marked the 21st career Ferrari Challenge P1 finish for EMS Race Team.

“ERIN does it again,” Weiland said after the race. “We started 4th, picked up a spot at the start and then snagged 1st out of the second corner. Fell back to 3rd briefly, but we managed to pass for 2nd position, and then 1st, and won the race here at historic Monza by 1.6 seconds. Really special thanks to Rossocorsa, R3 Motorsports, Ferrari of San Francisco, Coach Conrad Grunewald, David Cameron and Ray Banda. Great team effort.”

Great team win as ERIN the @EMScorporate Ferrari 488 Challenge Evo earned a P1 finish in the @FerrariRaces at @Autodromo_Monza this morning! ? pic.twitter.com/zwHVhhkGuB

The good times continued to roll for Weiland and company on Sunday despite challenging conditions in the wet. ERIN responded from early adversity to race her way back onto the podium during the second Ferrari Challenge event of the weekend. This time, the result was a P2 finish in the rain at Monza.

“We started P2 after a wet qualifying session,” Weiland said of Race 2. “We had a good run on the pole position car at the start but decided it wasn’t there, and broke early to tuck in. Only thing was, we broke early but too lightly and as we approached Turn 1 we had too much speed and had to take the run off. Bad job by the driver. But we rejoined in 5th, and had a really fun race from there.”

ERIN picked off three cars and was chasing down the race leader on Sunday when the safety car appeared with two laps remaining. That incident denied EMS the opportunity to fight for first. Nevertheless, an exciting way to get back into the racing circuit with a P1 and P2 at Monza. The team dedicated the weekend’s efforts to their friends at PETA Cruelty Free, Coach Sam’s Scholars and Cornerstone of Hope.